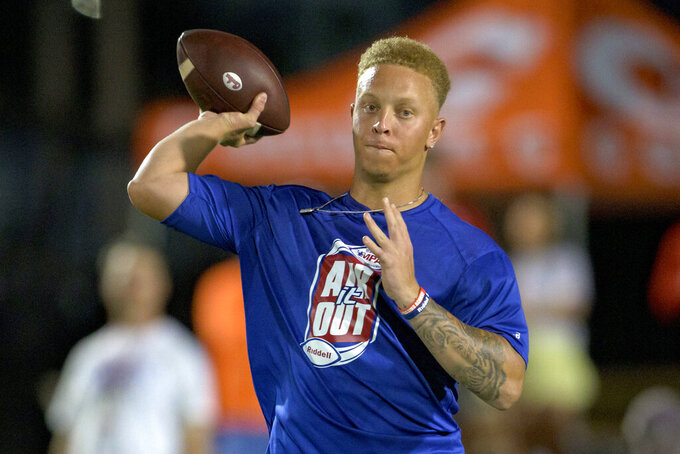 COLUMBIA, S.C. (AP) — Former Oklahoma quarterback Spencer Rattler is anxious and excited, confident and poised — and more than ready to take the field with his new team at South Carolina.

After helping the Sooners win the Big 12 Conference title in 2020, Rattler lost his starting job midway through last season and became one of the top passers seeking a new home last December.

Rattler found it with the Gamecocks and can't wait for Saturday night's home opener against Georgia State.

“I'll be live for the first time in a long time,” said Rattler, who started Oklahoma's first six games before Caleb Williams took over. “But I’m ready for that, ready to get hit once or twice."

Rattler, who's thrown for 4,514 yards, 39 touchdowns and 12 interceptions the past two years, has said he didn't really understand the switch. He had won 13 straight as a starter when Williams got the call with Oklahoma trailing rival Texas.

He's worked hard to clear his head and regain the style that had him as one of the leading Heisman Trophy contenders before last season.

Rattler took pages of notes, Satterfield said, and showed a willingness to be coached, despite his past success. And when Rattler is in the huddle, there's a confidence that's unlike other quarterbacks.

“He brings our entire team confidence,” Satterfield said. “He's there to compete and give our team a chance to win.”

Rattler believes he's prepared well in the offseason to be the best he can be. He's played and excelled in front of crazy, loud crowds before and can't wait to see how his new SEC team's fans measure up.

As far as facing Georgia State, Rattler hasn't mapped out specific individual goals for a successful debut. “We just want to go out there and execute every drive, every play,” he said. “That's what it comes down to. For us, we just want to focus on us.”

Wells was impressed by Rattler's easy demeanor and regular-guy approach to the season. “He's been consistent from day one,” Wells said of his new QB1. “He's kept his head down and just kept getting better and better.”

Georgia State coach Shawn Elliott knows his defense will have its hands full trying to slow down Rattler.

South Carolina needed four starting quarterbacks, including grad assistant Zeb Noland, last year due to injuries and transfers. Having consistency behind center with Rattler should bolster the offense.

“Their quarterback game is going to be a little more enhanced,” said Elliott, who spent 2010 through 2015 at South Carolina as offensive line coach and interim head coach midway through that final season after Steve Spurrier's abrupt departure.

“I think he's a quarterback who can make all the throws across the field,” Elliott continued. “So they'll probably take a little more opportunity to go down the field.”

Rattler's not saying much about South Carolina's game plan. He's just counting the days until he's back in control of a Power Five offense.

“Running out that tunnel with team, coaches, everyone,” Rattler said. “Hopefully, get that anxiety out of the way, not anxious, just fun, ready-to-go vibes. It's going to be fun.”