SEC East champion likely to be decided in 'Cocktail Party' 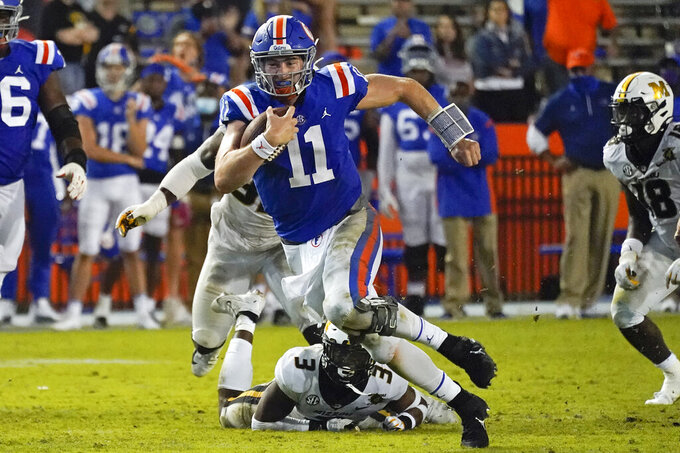 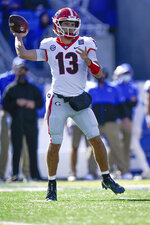 The "World's Largest Outdoor Cocktail Party” is one step shy of serving as the SEC East Division title game, with the winner gaining a chokehold on a spot in the league championship game in Atlanta next month. The victor has advanced to the league’s showcase event 10 times in the last 14 years.

Florida’s high-scoring offense versus Georgia’s stingy, but banged-up defense. The Gators are averaging 42 points a game thanks to quarterback Kyle Trask, dynamic receiver Kadarius Toney and matchup nightmare tight end Kyle Pitts. The Bulldogs are giving up 16.2 points a game and has been downright dominant in every game outside a 41-24 loss to No. 2 Alabama. Georgia, though, could be without as many as four defensive starters. Defensive back Richard LeCounte (motorcycle accident) and defensive lineman Julian Rochester (knee) are out. Safety Lewis Cine and defensive tackle Jordan Davis also are hobbled by injuries.

Florida: LB Brenton Cox gets his first shot at his former team and says facing Georgia will “definitely be personal.” Cox left the Bulldogs in August 2019, landed in Gainesville a few days later and then had to sit out last year under NCAA transfer rules. He’s been Florida’s best defensive player this season.

Georgia: QB Stetson Bennett has been far from perfect in the last two games, throwing a combined five interceptions against Alabama and Kentucky. No one would be shocked to see USC transfer JT Daniels or freshman Carson Beck come off the bench if Bennett struggles again.

Georgia has won three straight and six of nine in the series. … The Bulldogs are the home team, which means they only got four at Sanford Stadium when the SEC went to a 10-game, league-only schedule. … Florida’s 168 points are its most in any four-game stretch in SEC play since 2008, when the eventual national champ totaled 178 in wins against Georgia, Vanderbilt, South Carolina and Alabama. … Trask is tied for league lead with 18 TD passes and is the first in school history with at least four TD tosses in four consecutive games.