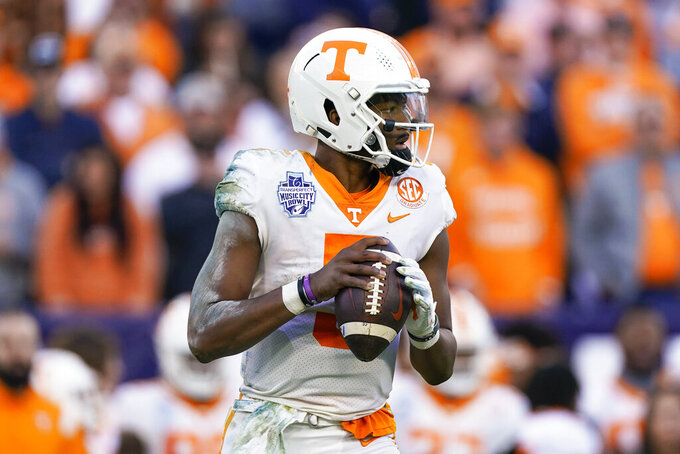 The Southeastern Conference has a national championship quarterback, a Heisman Trophy winner and a collection of promising passers both new and old.

The group is headlined by Alabama’s Heisman winner, Bryce Young, and Stetson Bennett, who led Georgia to the national title over Young & Co. But it hardly stops there.

There’s established starters at Tennessee (Hendon Hooker), No. 19 Arkansas (KJ Jefferson), No. 20 Kentucky (Will Levis) and Mississippi State (Will Rogers), and a dynamic but still unproven Anthony Richardson at Florida.

Not to mention highly regarded transfers and former Power Five starters Spencer Rattler at South Carolina and Jaxson Dart of No. 21 Mississippi.

Several SEC quarterbacks are receiving NFL draft buzz, especially Young, Levis and Richardson. The only one picked in the most recent draft was the Rebels' Matt Corral in the third round.

Auburn and No. 6 Texas A&M have just announced starters, with returnees beating out new transfers.

For the Aggies, Haynes King beat out former LSU starter Max Johnson and freshman Conner Weigman, a five-star recruit, in preseason camp. The speedy King opened last season as starter but had his season end in the second game with a broken right leg.

Rattler was a star at Oklahoma drawing Heisman buzz before getting replaced by Caleb Williams.

“I think Spencer was the victim of his own success last year, if I’m going to be completely honest,” said McElroy, who thinks Rattler found a good fit with the Gamecocks. “He became the face of college football, and that’s a difficult burden for a lot of guys.”

T.J. Finley, who took over as Auburn’s starter for the final three games last season because of an injury, will open against Mercer. He topped two transfers, Texas A&M’s Zach Calzada and Oregon’s Robby Ashford.

Missouri’s Brady Cook and Vanderbilt’s Mike Wright had already been announced as starters. Wright passed for 146 yards and two touchdowns and rushed for 163 yards and two more scores in an opening, 63-10 win over Hawaii.

Two coaches — Mississippi’s Lane Kiffin and LSU’s Brian Kelly — opted to keep their starters a secret. Both have top transfers vying for the job, with the Rebels getting Dart from USC and LSU landing Arizona State’s Jayden Daniels.

Dart is vying for the job as Matt Corral's successor with Luke Altmyer.

“My mind-set going forward is just to prepare myself like I'm going to be the starter, and I know Luke's doing the same thing,” said Dart, a highly rated recruit who started three games at USC as a freshman before getting sidelined by a knee injury.

“At the end of the day, we just want to win. So we're going to do everything in our power to do that.”

Some of the most intriguging SEC quarterbacks, besides the firmly established Young and Bennett:

— Hooker set program records in passing efficiency (181.4) and completion percentage (68%) last season. He threw for 31 touchdowns with only three interceptions and now has a year in Volunteers coach Josh Heupel's offense.

— Jefferson is a 6-foot-3, 242-pound dual threat for the Razorbacks. He passed for 2,676 yards and 21 touchdowns last season while leading the team with 664 rushing yards.

— Levis. The Penn State transfer settling in at Kentucky aims to follow up a career year in which he passed for 2,827 yards and 24 touchdowns. He spent the summer at the Manning Passing Academy and has been mentioned as a possible first-round selection in next year’s NFL draft.

— Rattler, the consensus No. 1 quarterback in the recruiting class of 2019, entered his sophomore season at South Carolina regarded as a legit Heisman candidate. Rattler went 15-2 as a starter, completing 70.1% of his passes for 4,595 yards with 40 touchdowns against 12 interceptions.

— Richardson. He’s only thrown 66 career passes but also flashed some electric skill. He had an 80-yard touchdown run and 75-yard TD pass for the Gators in the South Florida game. Former starter Emory Jones transferred to Arizona State in May.

— Rogers is now a veteran of Mike Leach's Air Raid offense. His 4,739 passing yards were the third most in SEC history, and Rogers also passed for 36 touchdowns. He broke 25 school records as a sophomore.

All these quarterbacks have different resumes and all have shown promise.

“I think just across the board, the ceilings for everybody is really high,” McElroy said. "Now, not everybody’s going to pan out. Let’s just be honest. The likelihood the league goes 14 for 14 for starters — everybody’s a star — is pretty unlikely.

“But the skills and the skill sets are there in pretty much every single place.”