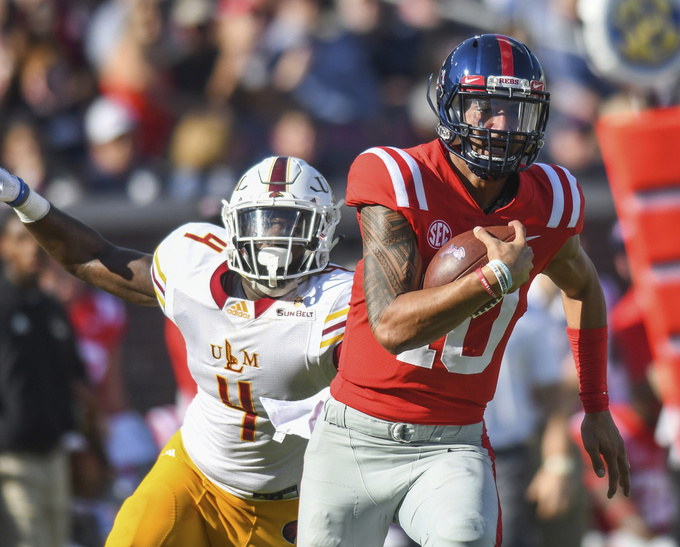 Mississippi came within 7 yards of the Southeastern Conference record with its national season-high 826 yards of total offense against Louisiana-Monroe.

It was the biggest output nationally since Oklahoma and Texas Tech each amassed 854 yards against each other in October 2016, and in the SEC since Paul "Bear" Bryant's Alabama Crimson Tide piled up 833 yards against Virginia Tech in 1973.

The Rebels went over 500 yards for the fourth time this season and rank seventh in the country at 540.8 per game.

They had 517 yards passing and 309 rushing and scored on their first nine possessions against ULM. DaMarkus Lodge, A.J. Brown and DK Metcalf each had more than 100 yards receiving in the 70-21 win .

Ole Miss' 49 first-half points were its most since it had 42 in two quarters against Houston in 1958, and its 536 yards in the first half were most by an SEC team in at least 15 years.

The only other team to generate 800 total yards this season was Boise State, which had 818 against Connecticut on Sept. 8.

Georgia Tech scored eight rushing touchdowns for the second week in a row, doing it while running for a national season-high 542 yards against Louisville on Friday. The Yellow Jackets also ran for eight TDs against Bowling Green. No other team has had more than seven rushing TDs in a game. The Yellow Jackets lead the nation with 373 yards rushing per game and 29 rushing TDs.

Missouri's Tucker McCann kicked the longest field goal of the season when he connected from 57 yards against South Carolina. He also became the third kicker to attempt six field goals in a game, and he made five of them. The 57-yarder was second-longest in program history behind Tom Whelihan's 62-yarder against Colorado in 1986.

Utah cornerback Jaylon Johnson became the first player this season to return an interception 100 yards. Johnson's pick-6 came in the second quarter against Stanford , making him the first to pull off the feat for Utah since 1994.

Kerrith Whyte Jr. became the first Florida Atlantic player to return a kickoff 100 yards, going all the way in the third quarter against old Dominion. Whyte had the previous long kick return for the Owls, taking one 98 yards in 2017.

Scott Frost's 0-5 record at Nebraska is the worst start by a first-year Big Ten head coach since Ron Turner went 0-11 at Illinois in 1997. There have been 41 coaching changes in the conference in those 21 years.