UConn returns as an independent after sitting out 2020 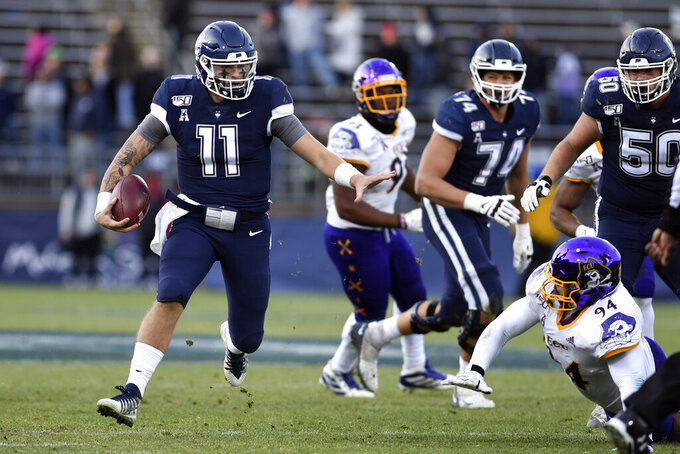 STORRS, Conn. (AP) — UConn captain Brian Keating was frustrated last fall, watching school after school return to football while the Huskies sat out the entire season because of COVID-19.

UConn and Old Dominion were the only bowl subdivision programs not to play at all in the fall or spring. The Huskies return to the field Saturday at Fresno State, 637 days after their last game.

“The decision for us not to play has ended up just being one of the better ones that we've made as a program," said Keating, a senior long snapper ”Everybody came back. Everybody had another year to develop physically and mentally. We took the time to practice, get in the weight room more and we made strides all over the field."

Old Dominion has a slightly longer wait before it opens Sept. 3 at Wake Forest. The Monarchs come into that game on an 11-game losing streak, having last won Aug. 31, 2019, a 24-21 victory over Norfolk State from the championship subdivision.

“We could open up the season in a parking lot and we would be happy,” Rahne said during his team's media day this month.

Since then, UConn has become an independent, leaving the American Athletic Conference last year so the school's basketball and other teams could rejoin the Big East, which does not offer football. That left UConn football without a conference home.

But Coach Randy Edsall insists the lack of games or a league hasn't changed his squad's identity approach or recruiting.

Despite being out of the public eye for almost two years, the coach says he's landed 14 verbal recruiting commitments for next season to go with a young squad that was able to develop physically without losing any eligibility in 2020.

“The goals that we have, that our kids want to accomplish are there and that's what we focus on,” he said. “You focus on what you can control and for us, if we win enough ballgames, we'll have an opportunity to get to a bowl game.”

UConn's game notes for Saturday include a chart showing the changes in the weight of key players, especially linemen, since they last suited up. Edsall said while many players have bulked up, others have slimmed down to add speed. That includes running back Kevin Mensah, who goes into his senior year looking for a third consecutive 1,000-yard season and needing just 1,182 yards to surpass Donald Brown as the school's leading rusher.

Whether the Huskies can translate those physical improvements to better results is something they will discover starting Saturday.

“I'm not worried about how they are going to compete, the kind of shape that they're in, everything else," Edsall said. “Now, can we go out an execute at a very high level for 60 minutes on a consistent basis? That is going to be the challenge.”