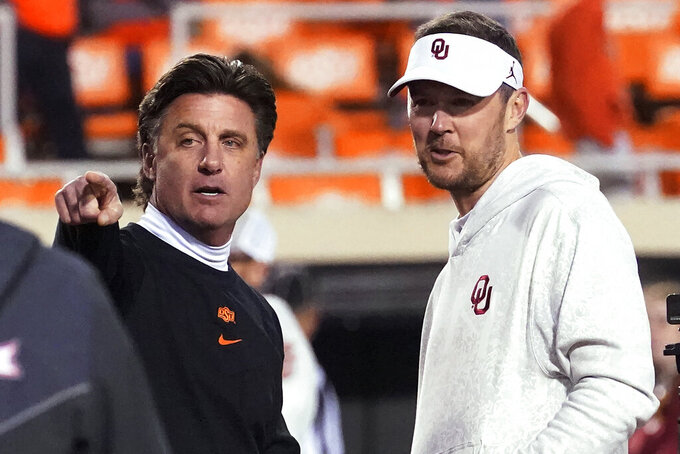 Southern California desperately wanted a marquee head coach after more than a decade of underachievement and embarrassment.

The Trojans landed one of the biggest, brightest names in the game.

Riley went 55-10 in five seasons leading the Sooners, winning four Big 12 titles and making three College Football Playoff appearances in his first head coaching job. USC sold the 38-year-old Texan on the chance to return the Trojans to their glory days as an annual national championship contender and the West Coast's premier program.

“USC has an unparalleled football tradition with tremendous resources and facilities, and the administration has made a deep commitment to winning,” Riley said in a statement. “I look forward to honoring that successful tradition and building on it. The pieces are in place for us to build the program back to where it should be and the fans expect it to be.”

Riley “will immediately transition to USC,” according to the school's statement. Interim coach Donte Williams will lead the Trojans (4-7, 3-5 Pac-12) in their season finale at California on Saturday night.

Bob Stoops is returning as Oklahoma's interim head coach to lead the Sooners in their bowl game, the school announced. Riley took over the program in 2017 when Stoops retired, and the Sooners have dominated the Big 12 in the half-decade since.

“Leaving OU was probably the most difficult decision of my life," Riley said. “OU is one of the best college football programs in the country, and it has been forever. That’s not going to change. It’s not going to change in the SEC, it’s not going to change with another head coach. It’s stood the test of time and it’s going to continue to do so. This was a personal decision solely based on my willingness to go take on a new challenge, and I felt like it was the right opportunity for me and my family to do that.”

USC fired Clay Helton in September after the second game of his seventh season in charge, and the school has been searching for a game-changing head coach to revive a program that has had meager success since a dominant run through the 2000s under Pete Carroll that included two national titles.

Since Carroll left for the Seattle Seahawks in late 2009, the Trojans have struggled under three former Carroll assistants and Helton, who brought stability and professionalism to USC, but not nearly enough on-the-field success while going 46-24. With one game left, USC is 87-48 with one Pac-12 title, one Rose Bowl victory and no College Football Playoff berths in 12 years under Lane Kiffin, Ed Orgeron, Steve Sarkisian, Helton and Williams.

The Trojans have been a sleeping giant on the college football landscape for over a decade — and Riley is expected to wake them up.

After being connected to several top candidates for jobs in this hiring cycle, USC athletic director Mike Bohn managed to land an even more impressive name than all but his most starry-eyed fans imagined.

“His successes and offensive accolades as a head coach the past five years are astonishing,” Bohn said of Riley. “Lincoln will recruit relentlessly, develop his players on and off the field, and implement a strong culture in which the program will operate with the highest level of integrity and professionalism. Lincoln is universally considered one of the brightest and most talented football coaches in the nation, and the fact that he chose USC is a testament to the strength of our brand, the power of the Trojan Family, and the leadership of our university."

Riley was Oklahoma's offensive coordinator when he was anointed successor to Stoops, who led the Sooners to 190 wins and a national championship in 17 seasons. The Sooners have owned their conference ever since the move, with Riley producing two Heisman Trophy-winning quarterbacks — Baker Mayfield and Kyler Murray — and some of the most prolific offenses in college football history.

While Riley doesn't have major ties to the West Coast, he has recruited well in California's talent-rich areas, and the Sooners currently have several commitments from elite California high schoolers over the next two recruiting classes. In the hours after Riley's move, Malachi Nelson — the Orange County high school quarterback considered one of the top prospects in the 2023 recruiting class — decommitted from Oklahoma, as did receiver Brandon Inniss and running back Treyaun Webb from Florida.

“One of the things that attracted me to OU, other than the rich history and amazing fans, was the stability in the coaching staff and their ability to develop the QB position,” Nelson wrote in his social media post.

Riley led the Sooners to yet another 10-win season this year, but Oklahoma's string of Big 12 titles was snapped when the Sooners (10-2) narrowly lost to Oklahoma State on Saturday night. With Oklahoma out of contention for the College Football Playoff, USC dived in to make a splash.

Rumors connecting Riley to the opening at LSU had been persistent for several weeks, but he shot them down after the Oklahoma State game.

“I’m not going to be the next head coach at LSU,” he said. “Next question.”

He said nothing about USC.

The last big-name coach to make such a seismic move was Jimbo Fisher, who left Florida State for a 10-year, guaranteed contract at Texas A&M at the end of the 2017 season. Riley was already making over $7 million per year in Norman, so he is likely to have received a significant increase from USC’s deep-pocketed boosters.

Oklahoma will be forced to conduct its first head coaching search since 1999 when the school hired Stoops, who is scheduled to be inducted into the College Football Hall of Fame next week.

“First and foremost, I’m a program guy, and whatever I can do to help OU and to support the players, of course I’m glad to do it," Stoops said. “I’ll do everything I can to help them finish the season in a strong and successful way and I look forward to that.”

Riley is the first OU coach to leave for another job since Jim Tatum left for Maryland after the 1946 season — but the Sooners hired Bud Wilkinson and became a dynasty.

“Oklahoma is one of the premier football programs and jobs in the country," OU athletic director Joe Castiglione said. “Our storied history, annual pursuit of conference and national championships, tremendous fan support, beautiful facilities and quality of life combine to make this an incredible place to recruit to and coach, and we have begun the search for our next great leader.”

New leadership will be yet another big change coming at Oklahoma, which is moving to the Southeastern Conference along with Texas. The move is currently set for 2025, but could very well come sooner.

The Trojans still have one game left to play this season, and they must beat the Golden Bears to avoid their first eight-loss season since 1991. Riley will already be at work recruiting the next class of elite talent to a school whose recruiting successes were inconsistent under Helton.