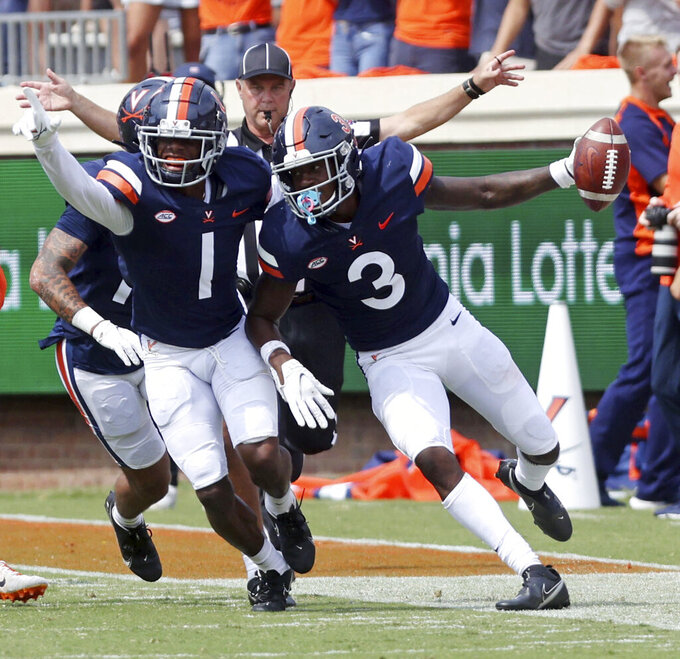 Virginia visits No. 21 North Carolina on Saturday night in a critical matchup for the Coastal Division race. The preseason division favorite Tar Heels (1-1, 0-1 ACC) lost their opener at No. 15 Virginia Tech, so they can’t afford to take a second loss before the end of September.

Bronco Mendenhall's Cavaliers (2-0) have won four straight meetings, including 44-41 at home last year. The Cavaliers have started this year by beating William & Mary and Illinois at home by a combined score of 85-14.

“Virginia is playing much better than we are,” UNC coach Mack Brown said.

No. 24 Miami will get a shot to slow one of the nation’s top rushing offenses in visiting Michigan State.

The Spartans (2-0) rank sixth nationally by averaging 299 yards in wins at Northwestern and at home against Youngstown State. That began with Wake Forest transfer Kenneth Walker III going for a 75-yard touchdown on his first carry with Michigan State on the way to a 264-yard, four-TD outing in the opener. Jordon Simmons ran for 121 yards in Week 2.

Miami (1-1) allowed 147 yards rushing in a season-opening loss to No. 1 Alabama and 127 yards in a close win against Appalachian State.

Boston College is a 15 1/2-point favorite at Temple according to FanDuel Sportsbook, but the Eagles (2-0) are in flux after quarterback Phil Jurkovec suffered a hand injury that required surgery and could cost him the rest of the season.

Dennis Grosel took over against Massachusetts after Jurkovec's injury. The Eagles could need time to adjust going forward, which could lead to an opportunity for the Owls (1-1).

It has been a rough start for the ACC against other power conferences.

The league has lost five of seven matchups to teams from the Big Ten and Southeastern conferences. That includes the marquee game on the national schedule so far, with No. 2 Georgia beating No. 6 Clemson. Last weekend's list included North Carolina State losing at Mississippi State of the SEC, and Syracuse losing to Rutgers from the Big Ten.

The league’s only wins have come with Virginia beating Illinois from the Big Ten and Pittsburgh beating Tennessee from the SEC.

The redshirt junior has caught a TD pass in six consecutive games, tied for the second-longest streak in program history. Roberson is two games shy of matching the record set by Sage Surratt in 2019.

Roberson and the Demon Deacons (2-0) host Florida State (0-2) on Saturday in their ACC opener.