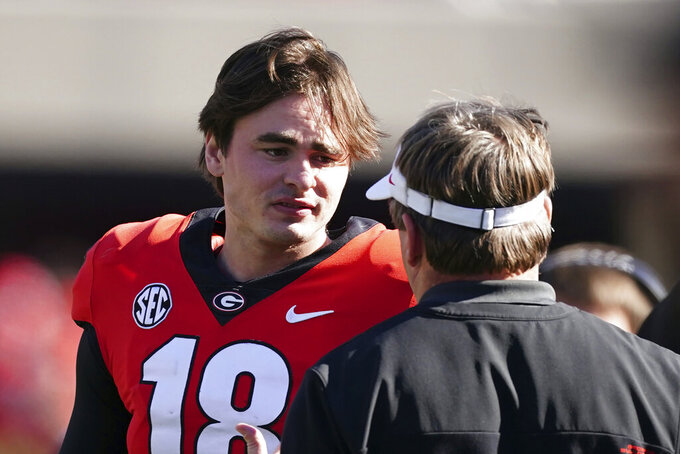 West Virginia knew what it got in transfer JT Daniels: a quarterback who went undefeated as a starter at Georgia — and has sat out more games than he's played in throughout his career.

Daniels understands the way to helping the Mountaineers become relevant in the Big 12 this season is by staying healthy for a full season.

“It’s an old saying, but availability is your best ability," Daniels said. “And I’ve missed 28-30 games over the last three years from injury.”

Coach Neal Brown on Monday named Daniels the starter for Thursday’s season opener at No. 17 Pittsburgh, a move that was anticipated. The renewal of the Backyard Brawl for the first time in 11 years will feature Daniels against his former backup at Southern Cal, Kedon Slovis, who took over after Daniels was injured in the 2019 season opener.

Their offensive coordinator at the time was Graham Harrell, who was hired at West Virginia in January. Daniels, who played just nine games over the past two seasons at Georgia, followed Harrell to West Virginia in April.

“I know him. I trust him,” Daniels said.

Without the benefit of playing spring ball, Daniels has had to do some quick learning, although he's familiar with Harrell's Air Raid style. Daniels’ time spent at Georgia actually helped his growth, Harrell said.

“He’s a really intelligent kid that can handle a lot of information,” Harrell said. “At the quarterback position, you can overload them with information. He can process information quickly."

Daniels was the second true freshman to start a season opener at Southern Cal in 2018. He started 11 games, missing one in midseason with a concussion. In 2019, when Harrell was hired to run the Trojan offense, Daniels suffered a season-ending knee injury in the opener.

Daniels missed much of 2020 at Georgia while awaiting medical clearance on his knee. Last year he missed several games with two upper-body muscle strains, then was relegated to a backup role as Stetson Bennett led the Bulldogs to the national championship.

Coach Brown describes Daniels, who went 7-0 as a starter at Georgia, as “weathered.”

“He’s really even-keeled," Brown said. “He doesn’t get too high or two low, not rattled easily. He’s been successful. He’s been on some good teams, too. The fact that he’s played in big games, I think, helps too. He arrived here as a really mature player and one that is really hungry.”

This is the 10th straight season that West Virginia has used a transfer as its starting quarterback.

The streak started with Clint Trickett from Florida State in 2013 and 2014. In 2016, junior college transfer Skyler Howard led the Mountaineers to a 10-win season. Will Grier arrived from Florida to provide a spark in 2017 and 2018. Austin Kendall followed from Oklahoma and Jarret Doege came from Bowling Green with lackluster results in the past three seasons.

Like Grier, who was shielded from media interviews until after the 2017 season opener, Daniels has yet to be made available since the start of fall practice. He told reporters in June after a youth football camp that Morgantown wasn't a huge adjustment from Athens, Georgia.

While Daniels' ability to stay healthy remains to be seen, he brings a reputation for a strong arm. He has six 300-yard passing games and has thrown at least three touchdowns five times. In the Peach Bowl following the 2020 season, he rallied Georgia from a 21-10 deficit in the fourth quarter to beat Cincinnati 24-21.

How well Daniels can contribute to the Mountaineers also depends on who he'll throw to. Three of the team's top five wide receivers entered the transfer portal in January. West Virginia is counting on Bryce Ford-Wheaton and Sam James to boost their production after combining for 1,080 receiving yards and eight touchdowns a year ago.

Brown said he believes Daniels fits in with his teammates because “we have a lot of hungry guys who are eager to prove.”

"He's prepared with a chip on his shoulder. I like where he’s at mentally and physically heading into this opener.”