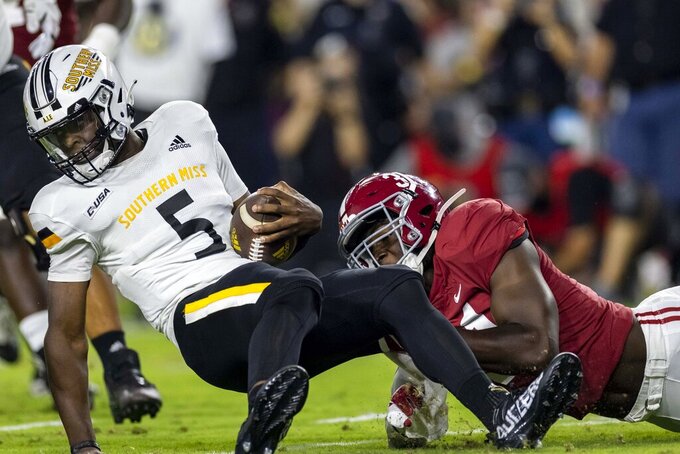 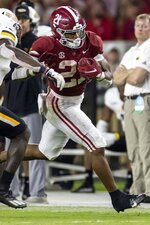 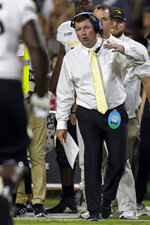 TUSCALOOSA, Ala. (AP) — Jameson Williams was off to the races the first time he touched the ball, and the second, and the fourth.

Williams, the Ohio State transfer who brought another speedy playmaker to Tuscaloosa, had three monster plays. He opened the game with a 100-yard kickoff return, then added an 81-yard touchdown catch on his second touch and another 83-yard runback in the top-ranked Crimson Tide's 63-14 win over Southern Miss on Saturday night.

“My strategy, every time I get the ball, I’m trying to go to the crib,” Williams said after becoming the first Tide player with two kick return TDs in a game.

Williams and the Crimson Tide (4-0) needed just 14 seconds to put to rest any worries of a letdown against Southern Miss (1-3) after a close win over No. 11 Florida and with No. 13 Mississippi on deck. Bryce Young was nearly flawless in throwing for five touchdowns while completing 20 of 22 passes for 313 yards.

“I call guys like him ... he’s a dog,” Alabama coach Nick Saban said. "He loves playing. He plays hard. He plays fast, and he’s got great speed.

"And I think that's one of the things that we loved about him in getting him here was he complemented our other guys because he gave us a great vertical threat."

The performance was marred only by a third quarter interception — his first of the season — at the goal line when the ball bounced off Williams, who was unstoppable when he caught the ball.

It was business as usual for 'Bama, win No. 100 in a row over unranked opponents and plenty of playing time for the backups. Just add in a trio of huge plays from the speedster Williams.

The game started with Williams' 100-yard dash shortly after No. 9 Clemson fell to North Carolina State, No. 16 Arkansas beat No. 7 Texas A&M and No. 23 Auburn averted an upset bid by Georgia State.

The Tide wasted not a single play showing this one wasn't going that way.

Williams spun out of the grasp of a defender and raced the remaining 65 yards untouched.

“He broke some tackles and ran away from us,” Southern Miss coach Will Hall said.

Even an Alabama mistake resulted in a touchdown.

John Metchie III was diving toward the goal line in the first quarter when he was knocked out of bounds. The ball popped out after he tried to reach back across the pylon, but tight end Cameron Latu reached across the line and pulled it into the end zone.

Southern Miss freshman Ty Keyes made his second straight start in place of an injured Trey Lowe. Keyes passed for 131 yards and two touchdowns with an interception. He also led the Golden Eagles with 41 rushing yards.

“I thought our young quarterback really grew up tonight,” Hall said, adding that “he showed he belongs in an environment like this.” THE TAKEAWAY

Alabama: Did just what it was supposed to in dominating a sandwich game between Florida and Ole Miss, outgaining the Golden Eagles 608-213. Billingsley's re-emergence after opening the season in Saban's doghouse gives the Tide another big weapon.

Alabama tailback Brian Robinson Jr. sat out the game with bruised ribs sustained late in the Florida game. Backups McClelland and Williams did just fine in his absence.

Alabama hosts Matt Corral, Lane Kiffin and No. 13 Mississippi, which has an open date to prepare.