WVU goes for 2 straight over ranked foe, faces No. 11 'Pokes 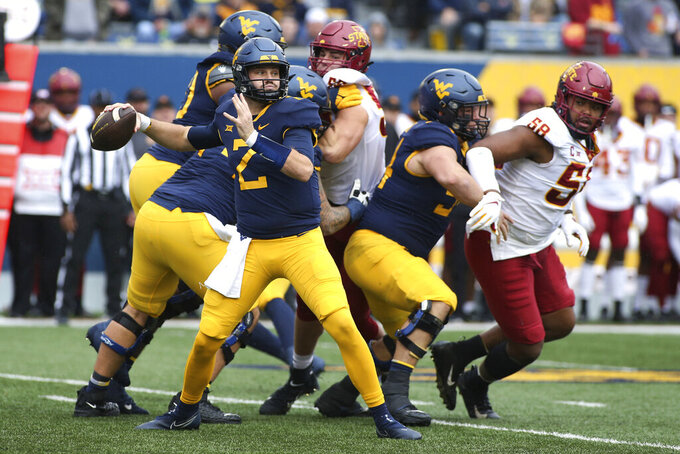 Line: Oklahoma State by 3 1/2, according to FanDuel Sportsbook.

Oklahoma State, tied with Baylor for second place in the Big 12 behind Oklahoma, currently holds the tiebreaker for a berth in the league championship game and can't afford many stumbles down the stretch. The Cowboys beat the Bears last month and still must face the Sooners. West Virginia is trying to beat a ranked opponent for the second straight week. The Mountaineers need to win two of their four remaining games to become bowl eligible.

Oklahoma State's defense against West Virginia QB Jarret Doege. Doege has made a comeback of late, leading the Mountaineers to two straight victories. He threw for a season-high 370 yards and three scores in a win over Iowa State last week. The Cowboys have given up the fewest touchdowns in the Big 12 with 16 and have not allowed more than 24 points in a game this season.

Oklahoma State: RB Jaylen Warren. The transfer from Utah State is fourth in the Big 12 with 850 yards rushing but has been held under 100 yards in his last two games.

West Virginia: WR Bryce Ford-Wheaton. He had a season-high 106 yards and two receiving TDs against Iowa State. His 435 yards receiving for the year are a career high and he has three games with at least six catches.