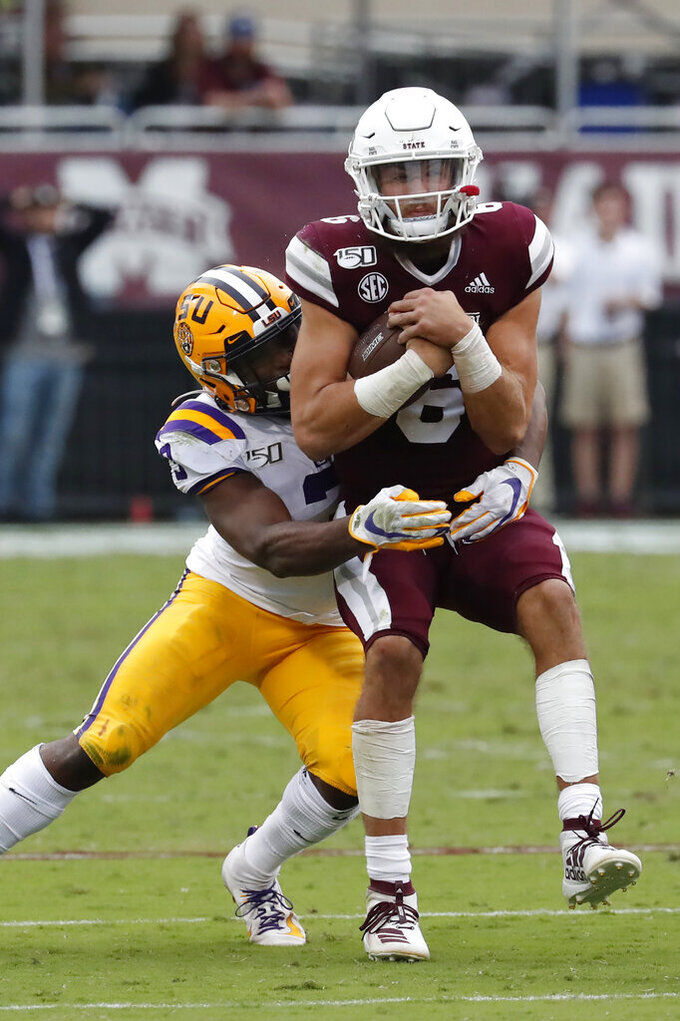 Texas A&M is coming off an important road win that gave the Aggies a dose of confidence. That's not the case for Joe Moorhead, who didn't like what he saw as his Mississippi State team lost last week to No. 2 LSU.

Moorhead was initially excited about the energy and fight his struggling team showed against LSU. Then he watched the film of the 36-13 loss, the Bulldogs' third straight.

"There were a ton of missed opportunities throughout that game in all three phases that would have made it a much closer game," he said. "I am not saying it would have (turned it) into a win, but there were a bunch of plays — and it is not just coach speak — that were left on the field."

The Bulldogs (3-4, 1-3 SEC) have had a lot of success against Texas A&M recently, winning the last three meetings and four of the last five.

They will face an Aggies team opening a three-game home stretch before wrapping up the regular season with back-to-back road games against top-10 opponents.

"We're nowhere close to the way we can play, but our ability to compete, handle moments, momentum swings, ups and downs of the game with a lot of young guys ... showed a lot of maturity," coach Jimbo Fisher said.

Fisher hopes that his team can use this home stretch to get better before things really heat up again at the end of the season.

"Keep growing, there's a lot of little things that we can see as coaches that we're getting better at," he said. "Hopefully we'll consistently grow in all three areas as we go. Kids had a great attitude, though, a great demeanor and relentless effort to compete in the game. They did a good job."

Mississippi State leads the SEC and is tied for seventh in the nation with 54 running plays of 10 yards or more. Running back Kylin Hill and freshman dual-threat quarterback Garrett Shrader lead the way in that category with 22 such plays each. Hill ranks fourth in the league with 643 yards rushing with five touchdowns. He has a knack for making first downs and 33 of his 134 carries this season have resulted in first downs. Shrader has ran for 440 yards this season and topped 100 yards in a win over Kentucky earlier this season with a career-best 125 yards rushing.

The Aggies allowed 250 yards rushing last week against Ole Miss, but the majority of those yards came on a handful of plays, leaving Texas A&M's team focused on limiting big plays this week.

"(We) played very well in those situations except for only four or five. That's a low percentage," Fisher said. "But the results of those four or five are something that we can't live with. So we have to learn to eliminate those and also, as I say, minimize the damage when you do make a mistake."

Texas A&M freshman Isaiah Spiller ran for 78 yards and a touchdown last week to get back on track after managing just 36 yards rushing combined in the previous three games. Fisher raved about Spiller's work last week and said he's been impressed with the strides he's made this season.

"He just keeps getting better ... his confidence overall is growing and you see the consistency and how he's playing," Fisher said.