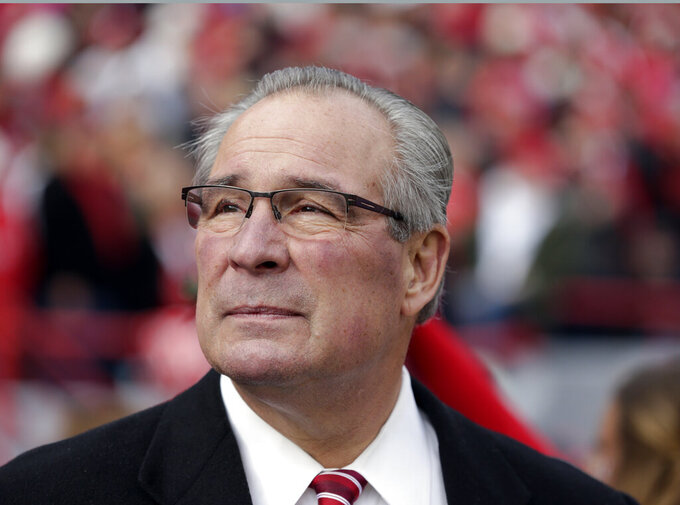 In this Nov. 4, 2017, file photo, Nebraska athletic director Bill Moos stands on the sidelines before an NCAA college football game against Northwestern in Lincoln, Neb. Nebraska's 68-year-old athletic director has pulled off two of the splashiest hires in college athletics in the 18 months since he arrived. He brought Scott Frost back to his alma mater after he coached Central Florida to an unbeaten season in 2017. This week he hired former Iowa State star player and coach Fred Hoiberg. (AP Photo/Nati Harnik, File)

LINCOLN, Neb. (AP) — Bill Moos has rolled with the punches. Now he is just on a roll.

Nebraska's 68-year-old athletic director has pulled off two of the splashiest hires in college athletics in the 18 months since he arrived, all while batting away criticism for leaving a hefty debt at his previous school and fending off social media rumors that forced the administration to issue a statement of support.

"I'm pretty thick-skinned," Moos said in an interview with The Associated Press. "I had an old AD who told me when I got into the business that it's lonely at the top, and it is."

Life at the top is pretty good right now.

"Bill is delivering exactly what we sat here and said in October of '17," chancellor Ronnie Green said.

Flush with unprecedented amounts of cash — Nebraska received a record $50 million distribution from the Big Ten for fiscal year 2018 — Moos has been able to spend what he thinks is necessary to return the school to the upper strata of college football and elevate a long-struggling men's basketball program.

"Our brand is not tarnished. It just needed to be dusted off and have a little bit of polish put on it," Moos said. "We have so much to offer here."

Moos' first move was to hire football coach Scott Frost away from Central Florida, where he orchestrated a dramatic two-year turnaround resulting in an undefeated 2017 season. Frost is a Nebraska native, and he quarterbacked the Cornhuskers' 1997 national championship team, but bringing him home was no sure thing.

Frost was the hottest coach in America at the time and his name was connected to other high-profile openings such as Florida and Tennessee. Moos landed him in December 2017 with a record contract for Nebraska: seven years, $35 million.

"I'm as big of a Bill Moos fan as you'll find," Frost said. "It was important to me, before I took this job, that we had an athletic director that was going to do everything possible to give the football program, and every sports program what they needed to be successful. Bill hasn't disappointed me. ... I probably wouldn't be here, possibly wouldn't be here, if Bill Moos wasn't the athletic director."

Next, Moos turned his attention to basketball. He had given former coach Tim Miles a one-year extension last May with the implicit message that the Huskers needed to reach the NCAA Tournament. That didn't happen, and less than a week after he fired Miles on March 26, he hired one of this coaching cycle's biggest names in former NBA player Fred Hoiberg.

Hoiberg coached Iowa State to four straight NCAA Tournaments before leaving for the Chicago Bulls in 2015. He has deep family ties to the state and university, and Moos' offer of a seven-year contract paying a total of $25 million closed the deal.

Under previous administrations, Nebraska's coaching pay was modest. Now the Huskers have the 10th-highest paid coach in football and 11th-highest paid in basketball.

Moos said when he entered discussions about the Nebraska AD job, he recognized football and men's basketball were on shaky ground. The football sellout streak that started in 1962 was ongoing, and basketball drew some of the biggest crowds in the nation, but trouble was on the horizon.

"Our fan base, it was apathetic, there was a bit of a lack of energy within the program," Moos said. "The fans had stood by us, but there was a risk there that we were going to lose some of them, relationships with the fan base, the donors and such."

Moos grew up on a ranch in eastern Washington and was an all-conference lineman at Washington State in the early 1970s. His first athletic director's job was at Montana, and he moved on to Oregon in 1995. He was there for 12 years, and under him the Ducks improved facilities, created new and greater revenue streams and became nationally prominent in multiple sports.

He retired to his ranch for three years before Washington State hired him to build a program that had fallen far behind its peers in the Pac-12. He hired football coach Mike Leach to much fanfare in 2012 and embarked on a stadium renovation and construction of a football operations building at a total cost of $130 million.

The projects fueled a stunning cumulative debt that stood at $67 million in 2018 and was projected to top out at $84.9 million by the end of fiscal year 2023, according to an audit last spring.

Ryan Durkan, former chairwoman of the WSU Board of Regents, said Moos presented a sound plan for paying for the improvements. But revenue fell well below projections, largely because of an underperforming Pac-12 Network.

Durkan said Moos deserves credit for elevating the program and probably has been assigned too much blame for the ongoing financial mess.

"Every person has their time and place and he did great things at WSU during his tenure," Durkan said. "And, yes, there was unfinished business and challenges left to address. No question about it. I think he's probably happy where he is and we're happy with our trajectory as well."

Moos said he had no regrets about his time at WSU.

"If I did that poor a job at Washington State," he said, "how come I'm at Nebraska now — one of the premier programs in the country?"

It hasn't been totally smooth for Moos at Nebraska. In January, rumors surfaced on social media criticizing how Moos comported himself in public and predicting an imminent firing.

"I'm a public person. I love to be in a crowd," Moos said. "And if people perceive that to be something that's of concern, well, then that's up to them."

"It had gotten to a point of being so out of hand that (they) jointly snipped that somewhat in the bud and endorsed me, which they had all along," Moos said.

Moos, who earns $1.05 million in the second year of his five-year contract, said he still has much to do. He is planning a $50 million project to upgrade and add amenities to 96-year-old Memorial Stadium, and the construction of a stand-alone football operations building is in the discussion stages.

Frost's football team is coming off a 4-8 first season, and Moos said the team probably is a year away from competing for a Big Ten title. Moos said improvement in basketball can happen quickly because it takes only one or two impact players to change a program's direction.

"We said our expectation is to compete at the highest level of NCAA athletics across the board and we're serious about that," Green said. "Bill is focused on what he came here to do to build this athletics program and move forward, and we couldn't be more pleased with what he's done absolutely across the board."

This story has been corrected to show that Ryan Durkan is the former chairwoman of the Washington State Board of Regents.