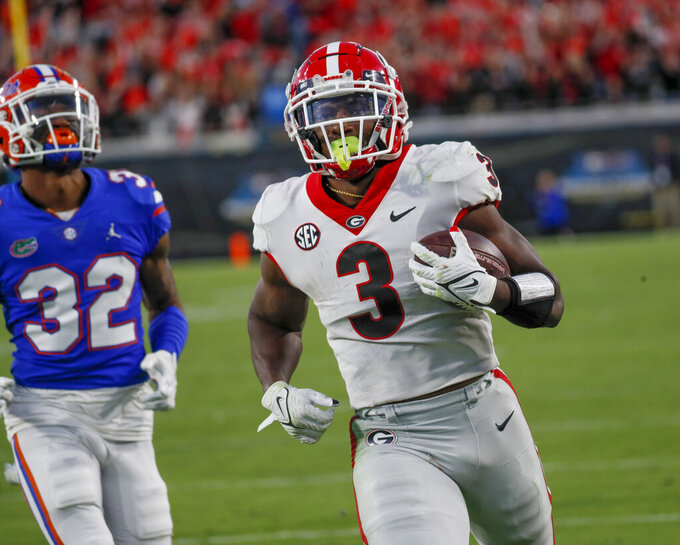 DALLAS (AP) — The administrators in charge of the College Football Playoff plan to meet again on Dec. 1 to continue expansion talks, which need to reach a consensus by the end of the year if a new postseason format is to be implemented for the 2024 season.

“There is a consensus that expansion of CFP would be good for college football,” Executive Director Bill Hancock said Thursday after two days of meetings with the CFP management committee. “It’s just a matter of how.”

The most crucial detail facing the management committee, comprised of 10 conference commissioners and Notre Dame’s athletic director, is how big should the expansion from the current four-team format be?

“There are some people who prefer eight, and some people prefer 12, and I think everybody understands the alternative is four,” Hancock said.

Committee members exiting the meeting room at a hotel at Dallas/Fort Worth International Airport, deferred to Hancock speaking for the group.

Hancock described the meetings as “productive” with really good dialogue among the group.

“Frankly, where we are today doesn’t surprise me,” Hancock said. “It would be such an important change for college football. Everybody needs to weigh in. There is, in the room, there’s a collegiality, there’s cooperation, there is respect, there is listening. Everything you’d want in a board, or in any group when they are trying to make a decision.”

Any recommendation from the management committee would have to go to the CFP Board of Managers, made up of presidents and chancellors from the universities, for approval. That group is not expected to be part of the Dec. 1 meeting in the Dallas area.

The board does regularly meet in person at the site of the national championship game, which is set for Jan. 10 in Indianapolis.

While the management group heard from some media consultants, there were no television executives or bowl representatives involved in the meetings this week.

A 12-team format was unveiled in June and there was hope it would be approved in September for for implementation before the end of the current 12-year contract with ESPN that runs through the 2025 season.

Instead, the process has bogged down since it was revealed in July the Southeastern Conference planned to add Big 12 flagship schools Texas and Oklahoma by 2025.

There are obstacles to eight that would make it difficult to ever pass and plenty of details to work through even if the commissioners do coalesce around 12.

Hancock said after the last meeting in late September that if the management committee can not reach a consensus on an expansion plan by January, expansion would be put on hold and the four-team format would remain in place through the length of the ESPN contract.

“I know everybody’s looking for some kind of deadline date, and I think it does have to be by the end of the year, but that’s not in stone,” Hancock said. “What you don’t want to do is rush things, and we’re just not going to do that. We’re going to take our time, be deliberate, talk to be people.”