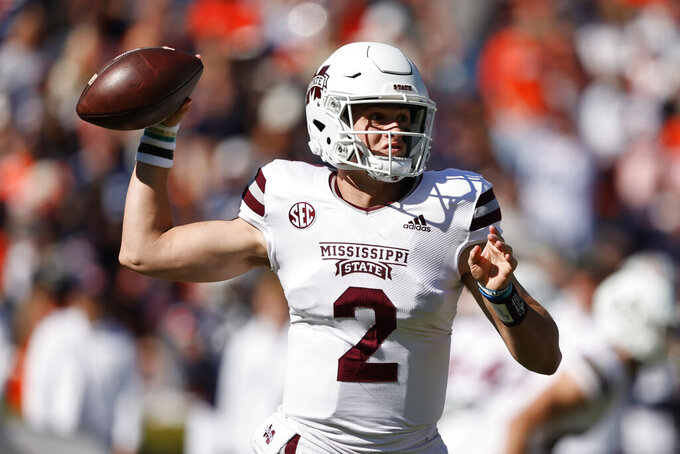 Mississippi State quarterback Will Rogers (2) throws a pass during the first half of an NCAA college football game against Auburn, Saturday, Nov. 13, 2021, in Auburn, Ala. (AP Photo/Butch Dill)

—Bailey Zappe, Western Kentucky, threw for 482 yards and five TDs,, including three during a four-minute span in the second quarter, in a 42-21 win over Rice.

—Bryce Young, Alabama, passed for 270 yards and five TDs, including three to Jameson Williams, and the No. 3 Crimson Tide beat New Mexico State 59-3.

—BJ Byrd, Morehead State, caught 12 passes for a career-high 223 yards and four touchdowns, including a 4-yarder with 20 seconds left, in a 36-35 win over Stetson.

—Tyler Badie, Missouri, ran for 209 yards and a touchdown, and the Tigers held off South Carolina 31-28.

_Ethan Ratke, James Madison, kicked a school-record six field goals and set NCAA records for most career field goals (100) and points for a kicker (517) in a 32-22 victory over William & Mary.

—Braelon Allen, Wisconsin, rushed for 173 yards and three TDs to help the No. 20 Badgers beat Northwestern 35-7.

Gerry Bohanon had a hard time finding the words to describe just how he felt after 18th-ranked Baylor ran over Oklahoma, ending the fourth-ranked Sooners’ nation’s-best 17-game winning streak.

The hard-nosed quarterback does know what it means going forward for the resurgent Bears: keep going.

Bohanon threw a touchdown pass and ran for two scores in the fourth quarter and Baylor’s defense harassed both Oklahoma quarterbacks in a 27-14 win that kept the Bears in contention for a spot in the Big 12 championship game, a week after an unexpected loss at struggling TCU.

The Sooners were held to 260 total yards, their fewest ever with coach Lincoln Riley in his five seasons as head coach and two seasons as offensive coordinator before that. It was their fewest points in a regular-season game since a 48-14 home loss to Baylor in 2014, which came weeks before they ended that season with a 40-6 loss to Clemson in the Russell Athletic Bowl.

8_Straight games with an interception by Montana's Justin Ford.

9_Straight wins by No. 24 Louisiana-Lafayette after beating Troy 35-21, setting a school record.

56-Road Big 12 games Kansas had lost before knocking off Texas 57-56 in overtime.

Michigan tight end Erick All woke up with a sore ankle, a leftover reminder of the Wolverines’ last painful loss.

All hauled in a 47-yard touchdown pass from Cade McNamara with 3:29 left and outran Penn State defenders to the end zone to help boost the Wolverines’ bid to end their 16-year championship drought.

All was hurt when the Wolverines fell to No. 8 Michigan State on Oct. 30 and didn’t play last week in a win over Indiana. He knew the Wolverines needed to stay within reach of the Spartans and No. 6 Ohio State in the Big Ten East.