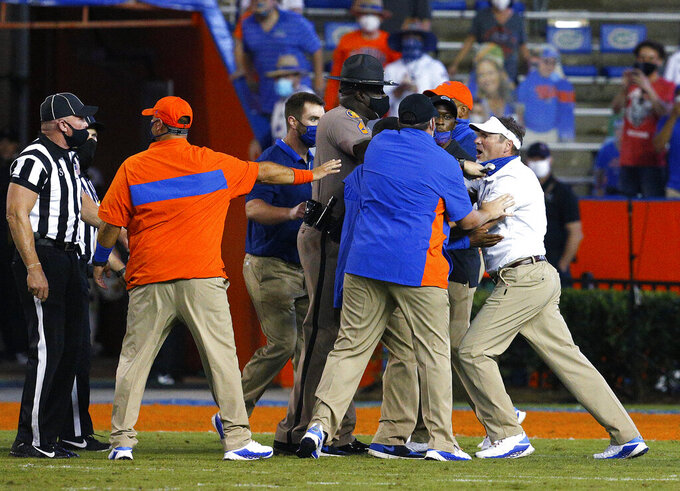 Florida coach Dan Mullen, right, is held back by coaches and law enforcement after a fight broke out at the end of the first half of the team's NCAA college football game against Missouri in Gainesville, Fla., Saturday, Oct. 31, 2020. (Brad McClenny/The Gainesville Sun via AP)

Mullen showed up following a 41-17 victory over Missouri wearing a full “Star Wars” villain costume, complete with a red lightsaber. He even launched into character at the beginning and end of his news conference.

Mullen insisted he chose the outfit long before he was in the middle of a halftime scuffle between the teams Saturday night. Ultimately, though, he admitted his attire was “suitable tonight,” and he wasn’t just talking about Halloween.

It was closer to perfect given the coach’s uneven October, which included eyebrow-raising comments about wanting to pack the Swamp — Florida Field, not Dagobah — during a pandemic and questioning an NCAA decision regarding practicing on Election Day.

Mullen’s month concluded with a lopsided victory that was marred by a benches-clearing melee at halftime.

It started when Missouri’s Trajan Jeffcoat delivered what looked like a high, late hit on Florida quarterback Kyle Trask after he released a Hail Mary at the end of the second quarter. The ball fell incomplete, and Trask landed hard on his back. His linemen came to his defense.

“It was really cool just to see my teammates have my back,” Trask said.

So did Mullen, who started screaming at the officials and in the direction of the opposing sideline.

“I was trying to get our players off the field to make sure we didn’t have issues and have a whole bunch of guys suspended (against Georgia),” Mullen said. “We’re already a paper-thin outfit right now.”

Players from both teams converged near Missouri’s side of the field, and wild punches could be seen flying and connecting. Only three players were ejected. The SEC could hand down more punishments following a review.

It was the latest chapter for Mullen, who was ripped nationally for saying he hoped to get 90,000 fans inside Florida Field for a home game, a stance he refused to back down from until four days later. Even then, he apologized “if I offended anyone.”

Mullen tested positive for COVID-19 a few days later and spent nearly two weeks in quarantine, which some attributed to karma.

Mullen found new critics in the past week, many of them rebuking his stance on the NCAA’s mandate regarding sports-related activities on Election Day. He bemoaned altering a team voting event — which is still permissible under NCAA rules — and made it clear his biggest issue was having to adjust his routine.

“What it does is it throws you completely off your game-week routine, which obviously to me is very dangerous because you’re out for the health of the kids, the buildup of the game,” Mullen said. “You kind of have a set routine, a set schedule, you practice certain ways building up to Saturday. And now you can’t do it, especially here in Florida where most of the guys, most people … I’ve already voted.”

It’s quite possible that Mullen’s real gripe was losing a day of practice before his eighth-ranked Gators (3-1) play Southeastern Conference rival and No. 5 Georgia (4-1) next week in Jacksonville, a game that likely will determine who wins the East Division and plays in the league title game.

“We’ve had to cancel a bunch of those things that we had planned,” Mullen said. “We’ve had to kind of redo this entire schedule. It messes with your preparation, the physical preparation of the players and the safety of them getting ready for the game. Kind of disappointing the NCAA did that.”

Mullen had to be pulled away several times and was so irate by the end of the exchange — anger can lead to the dark side — that he came back out of the locker room tunnel for a curtain call. Fans chanted his name as he returned to the field for the start of the third quarter.

Two hours later, Mullen was celebrating a lopsided victory and firing up the 12,049 on hand with the “Gator Chomp.” Then he transformed into Darth Vader, the iconic villain who ends up redeeming himself by defeating the evil emperor.

Maybe that's where Mullen ultimately lands, with wins against Georgia and potentially Alabama. He might want to keep the lightsaber handy just in case.