High-flying No. 9 Trojans look to keep rolling against Bears 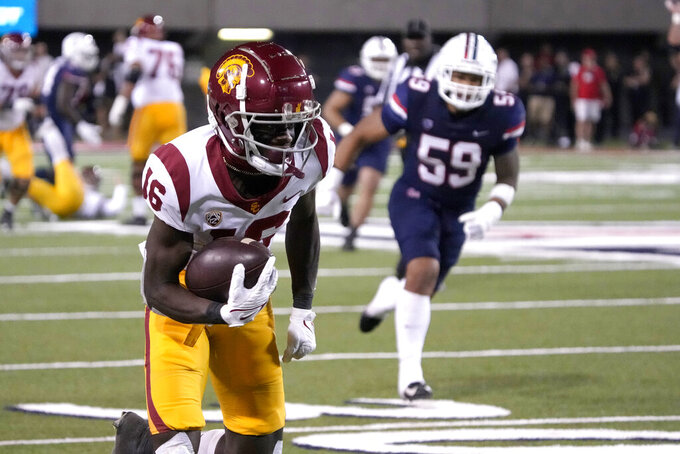 Lincoln Riley found ways to overcome losses in October to reach the College Football Playoff during his time at Oklahoma, and there could be a similar path in his first season at USC. The Trojans, who navigated significant personnel absences to defeat Arizona 45-37 last week, do not leave Los Angeles for the rest of the regular season. The Golden Bears are simply trying to become bowl eligible, a difficult task following a 42-24 loss to No. 8 Oregon with three ranked opponents in their final four games.

USC QB Caleb Williams vs. Cal’s secondary. Williams was brilliant against the Wildcats, throwing for 411 yards and five touchdowns without an interception despite not having his top two wide receivers available. Jordan Addison and Mario Williams could be back this week, which does not bode well for the Golden Bears and the worst pass defense in the Pac-12 allowing 292.3 yards per game.

CAL: QB Jack Plummer struggled in the loss to the Ducks, throwing for 214 yards and one touchdown with two interceptions. While redshirt freshman Kai Millner played well in relief, Plummer is expected to remain the starter. The Purdue transfer will have to be productive without putting the ball at risk against a defense that thrives on takeaways.

USC: WR Tahj Washington stepped up with seven receptions for 118 yards and two touchdowns against Arizona. While Addison and Mario Williams have been the top options in the passing game, Washington should see a larger role moving forward.

Caleb Williams has thrown one interception in 275 passes, the only turnover committed by USC this season. Every other FBS team has lost the ball at least three times. ... Cal freshman RB Jaydn Ott has not been nearly as effective since tallying 274 yards rushing and three touchdowns against Arizona on Sept. 24. In four games following that breakout performance, Ott has 212 yards and one touchdown on 61 carries. ... Trojans DL Tuli Tuipulotu leads the Pac-12 in tackles for loss (12 1/2) and is second in sacks (seven). ... The Golden Bears have won two of the past three meetings in the series following a 14-game losing streak to the Trojans.