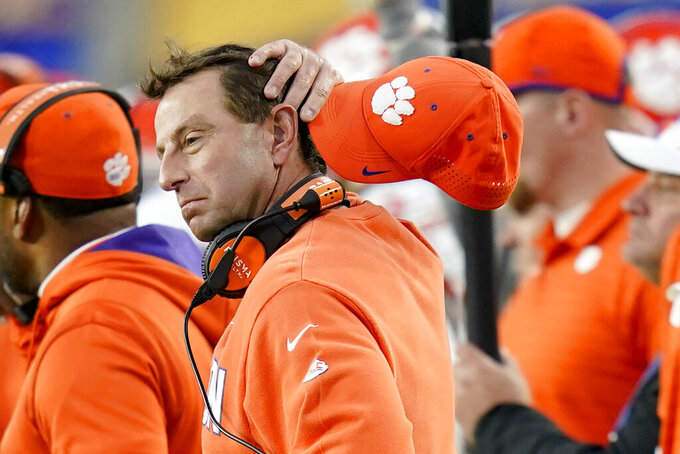 Clemson head coach Dabo Swinney wipes his head as he watches as his team play against Pittsburgh in the second half of an NCAA college football game, Saturday, Oct. 23, 2021, in Pittsburgh. Pittsburgh won 27-17. (AP Photo/Keith Srakocic) 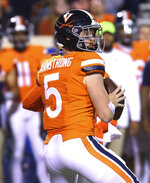 Louisville at North Carolina State. The one-point loss at Miami dropped the Wolfpack (5-2, 2-1 ACC) from the AP Top 25 but doesn’t change the fact that Dave Doeren’s team still controls its own destiny in the Atlantic Division. That was a point Doeren noted and then twice reiterated during his Monday news conference after a frustrating and mistake-filled performance against the Hurricanes.

N.C. State is unbeaten at home and has won two of the last three meetings with Scott Satterfield's Cardinals (4-3, 2-2), who are trying to stay in the division race led by No. 13 Wake Forest (which hosts Duke on Saturday).

Virginia QB Brennan Armstrong against BYU’s pass defense. Armstrong is second in the Bowl Subdivision ranks by throwing for 402.5 yards per game, including a program-record 554 yards – most by an FBS player this year – at North Carolina. He’ll face a Cougars defense that has allowed five touchdown passes in eight games and also has eight interceptions in six games.

Florida State is a 9 1/2-point underdog on FanDuel Sportsbook in a trip to Clemson that stands out by the struggles each traditional league power have faced this year. FSU (3-4, 2-2) has won three straight since an 0-4 start, sneaking by Syracuse on a late field goal then winning at UNC and rolling past Massachusetts.

The six-time reigning league champion Tigers (4-3, 3-2) are sputtering offensively as they try to push their series win streak to six games. Last year's meeting was called off at the last minute due to COVID-19 concerns, leading to a testy reaction from Tigers coach Dabo Swinney.

Pittsburgh quarterback Kenny Pickett has made a huge jump as a fifth-year senior entering the 17th-ranked Panthers’ home game against Miami. Notably, he’s doing more with fewer attempts this season, going from throwing 39.1 passes per game in 2019 and 36.9 last year to 34.2 this year. Yet he’s gone from averaging 262.2 yards passing for the past two seasons to 322.3 this year.

Additionally, he’s thrown for 21 touchdowns with one interception after throwing for 13 TDs and nine picks in each of the previous two seasons. That has Pickett rising boards as an NFL draft prospect and Heisman Trophy candidate for the Coastal Division leader.

North Carolina receiver Josh Downs is having quite a first year as the Tar Heels’ go-to threat. Downs is fifth in FBS in receiving yards (119.6 per game), third in catches (8.6), and tied for fifth in TD catches (eight). He has hauled in at least one TD in every game and is averaging 35.4 yards on those scoring catches. The Tar Heels step out of ACC play this weekend at No. 11 Notre Dame.