LSU-Texas a landmark game for Burrow on several levels 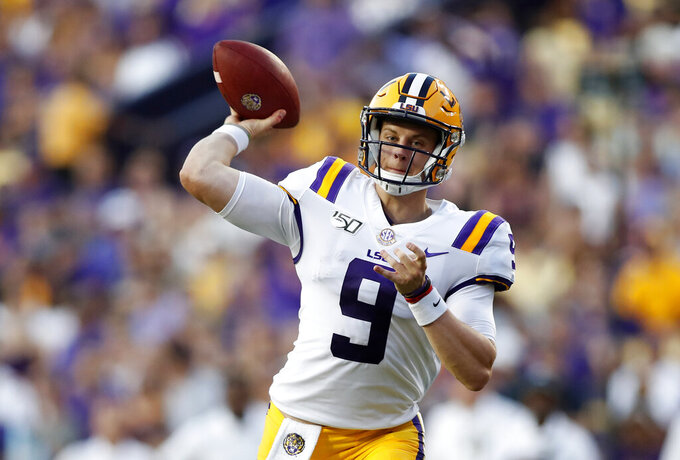 FILE - In this Aug. 31, 2019, file photo, LSU quarterback Joe Burrows (9) throws a pass during the NCAA football team's game against Georgia Southern in Baton Rouge, La. LSU faces Texas this week. Burrow has accounted for 15 touchdowns in LSU’s last three games, including a school record-tying five TDs passes in the season opener, and is the first Tigers quarterback ever with 20 completions in four consecutive games. (AP Photo/Tyler Kaufman, File)

Video game references seemed fitting after Burrow needed only one half last week to tie an LSU single-game record for touchdowns with five. Burrow said he wasn't aware of the record during the game and wasn't disappointed that his chance to break it vanished when he was pulled from a lopsided triumph over Georgia Southern after his first series of the third quarter.

"There'll be more chances throughout the year for that," Burrow said in a matter-of-fact manner.

This, after all, is the same person who predicted over the summer that LSU's new spread offense would be capable of putting up 40 to 60 points in a game, and then backed it up by leading the Tigers on six touchdown drives in the first half of the opener.

This week, No. 9 Texas gets its chance to try to slow down Burrow and quiet the hype surrounding LSU's new-look, up-tempo, no-huddle passing game.

"With a team like LSU, you typically think of running backs," Texas safety Caden Sterns said. "But when you look at film, you can see he runs the offense pretty well."

Unsurprised by Burrow's affinity for LSU's new offense is his father, Jimmy, a former Nebraska defensive back who spent one season playing for the Green Bay Packers and played five seasons in the CFL before a long career as a college assistant coach.

"I've seen him do that a million times in high school," said the elder Burrow, who retired this year to enjoy his son's final season of major college football after spending the previous 14 seasons as defensive coordinator for Ohio, in the Mid-American Conference.

Ohio State, where Joe Burrow began his college career, ran a similar run-pass option scheme. And although the younger Burrow played sparingly at Ohio State, he practiced that system for three years before transferring to LSU in 2018.

"It's very familiar territory for Joe," his father said.

Burrow considers himself an average athlete, but a tough one who is comfortable with the mental aspect of the game, from studying opponents during the week to making reads at the line of scrimmage and being decisive about where to go with the ball. He completed passes to nine players in the opener and often was ready to take the snap before officials would allow it because they were holding up play for defensive substitutions.

"He started going to games before he was even a year old, so there had to be some osmosis going on," Jimmy Burrow said with a laugh, recalling how his son learned to ride his bike in Nebraska's Memorial Stadium. "There was always football around."

Jimmy Burrow would have a graduate assistant record Joe's youth football games and they'd watch them together when Joe was still in grammar school. But instruction was limited to fundamentals and technique, such as lowering one's shoulder pads before contact. During high school, though, they continued to watch video together, and Jimmy Burrow would teach his son more about what defenses were trying to do.

Joe Burrow never actually played for a football team that his father coached, but Jimmy did once fill in for Joe's basketball coach — and there was tension.

"I was a little out of my comfort zone, but I'm smart enough to know if you're throwing up 3s and they're not going in, you've got to quit shooting them, right?" Jimmy Burrow recalled. "He didn't see it that way."

The younger Burrow recalled, "I'm like, 'No, I'm not going to stop shooting. I'm a shooter.'"

Now, it seems, Joe Burrow's approach has matured. He said his "favorite stat" from LSU's past victory was that all five running backs who played caught a pass.

"I was pretty proud of that," Joe Burrow said, because it showed he and backup quarterback Myles Brennan were smart about "taking our check downs and not forcing the ball into tight windows and risking turnovers."

That's a far cry from the kid who disagreed with his father's instructions to stop jacking up 3s.

"He's aggressive, but he's smart, so that trumps that aggressiveness most of the time," Jimmy Burrow said. "He loves his teammates and he knows the more all of them are involved, the better off they're all going to be."

In an odd twist of fate, Burrow is now trying to beat one of the men who believed in him most when he was entering college. Shortly before current Texas coach Tom Herman took his first head coaching job with Houston, he was Ohio State's offensive coordinator and recruited Burrow.

Burrow said he "owes a lot" to Herman, who was "really the only coach from bigtime programs that had any faith in me" when he was finishing high school in Athens, Ohio. So when he heard Herman was hired at Texas, "I was happy to see him have success because I knew how good of a man he was."

Yet he could not have imagined when he first joined Ohio State that he'd one day be trying to beat Herman in Austin as the starter of a Southeastern Conference school down on the bayou.

"Crazy things happen all the time," Burrow said. "I guess this is one of them."