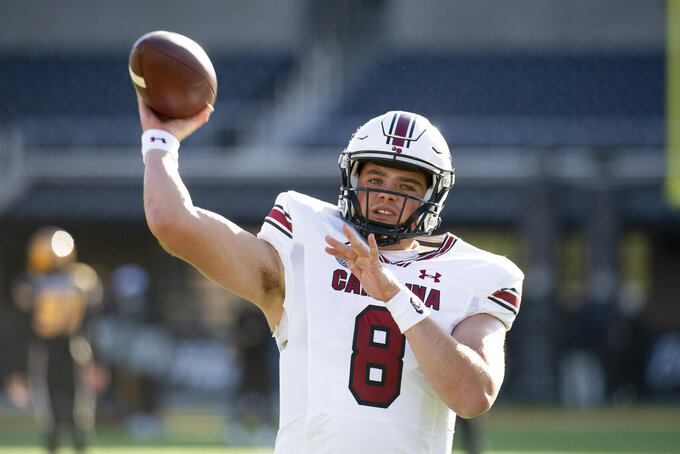 FILE - South Carolina quarterback Zeb Noland warms up before the start of an NCAA college football game against Missouri Saturday, Nov. 13, 2021, in Columbia, Mo. Noland, who began the season as a graduate assistant coach for South Carolina coach Shane Beamer, will get the start at quarterback for the Gamecocks after Jason Brown entered the transfer portal. (AP Photo/L.G. Patterson, File)

Line: North Carolina by 9 1/2, according to FanDuel Sportsbook.

North Carolina QB Sam Howell vs. South Carolina secondary: A projected first-round NFL draft pick, Howell looks to wrap up his college career with a splash. Considered a dynamic passer with outstanding arm strength and mobility, Howell has thrown for 2,851 yards and 23 touchdowns with nine interceptions this season, while rushing for a career-high 824 yards and 11 TDs. He'll face a very good Gamecocks secondary that allowed just 179 yards passing per game and finished tied for 10th nationally with 15 interceptions.

South Carolina: RB Marshawn Lloyd. With leading rusher Zaquandre White not playing, the Gamecocks will turn to their top 2020 recruit Lloyd, giving them a better glimpse of their future at running back.

They two teams have faced off in Charlotte twice to start the season, with the two games decided by a total of eight points. South Carolina won 17-13 in 2015; North Carolina won 24-20 in 2019. ... South Carolina is playing in a bowl game for the first time since 2018. ... This is expected to be Howell's last game before entering the NFL draft, although he had not announced any decision. ... North Carolina beat South Carolina 24-20 in the last meeting on on Aug. 31, 2019 behind a rally led by Howell. ... This will be the Gamecocks' final game before transfer QB Spencer Rattler arrives via Oklahoma and the transfer portal.