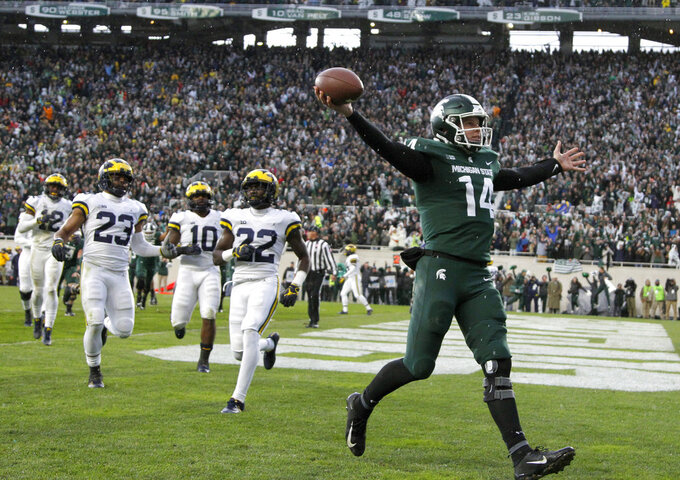 FILE - In this Oct. 20, 2018, file photo, Michigan State quarterback Brian Lewerke, right, celebrates after making a touchdown reception during the third quarter against Michigan in an NCAA college football game in East Lansing, Mich. Michigan State plays Oregon in the Redbox Bowl on Monday. The time off before the bowl did a lot for Lewerke, who missed three games down the stretch with a shoulder injury. Coach Mark Dantonio said Lewerke's arm strength is back and he will start the bowl game. (AP Photo/Al Goldis, File)

Both teams were ranked in the top 15 of the AP Top 25 earlier this season and had much higher aspirations than the Redbox Bowl. But ending the season with a win against an opponent with pedigree would provide a silver lining to an otherwise disappointing campaign.

Michigan State's Run D vs. Oregon's offense. The Spartans rank first among FBS teams in run defense, allowing just 81.3 yards per game. But the Ducks present a tough challenge with talented freshmen CJ Verdell and Travis Dye. They are one of just six Power Five running back duos with at least 700 yards each.

Michigan State: DL Kenny Willekes. The Big Ten's Defensive Lineman of the Year led the conference in tackles for loss (20½) and ranked fourth in sacks (8½).

Oregon: QB Justin Herbert. The bowl season already was a big win for the Ducks when Herbert announced he would return for his senior season. Herbert has the longest streak in the nation with 27 straight games with at least one TD pass. Oregon has averaged 39.4 ppg in Herbert's 27 career starts, including 13 games with at least 40 points.

Michigan State won five of its last six bowl games. ... Oregon has lost three straight bowl games since beating Florida State in playoff semifinal at the Rose Bowl following 2014 season. ... The Spartans have held the opposition to 21 or fewer points nine times. ... Michigan State has allowed just 29 runs of at least 10 yards, tied for the fewest in the FBS. ... Spartans RB Connor Heyward's 32 catches are the most for a Spartans RB since Le'Veon Bell had 32 in 2012. ... Oregon is 17th in the nation in scoring (37.2 ppg) and has scored at least 21 points in the first half in eight of 12 games. ... Ducks WR Dillon Mitchell needs 27 yards to break Josh Huff's single-season school record of 1,140 set in 2013. ... Oregon can join Oklahoma and Memphis as the only teams with a 3,000-yard passer, 1,000-yard rusher and 1,000-yard receiver. Herbert needs 15 yards passing to reach 3,000. Verdell needs 25 yards rushing to join LaMichael James and Royce Freeman as the only Ducks freshman to get to 1,000 in a season.