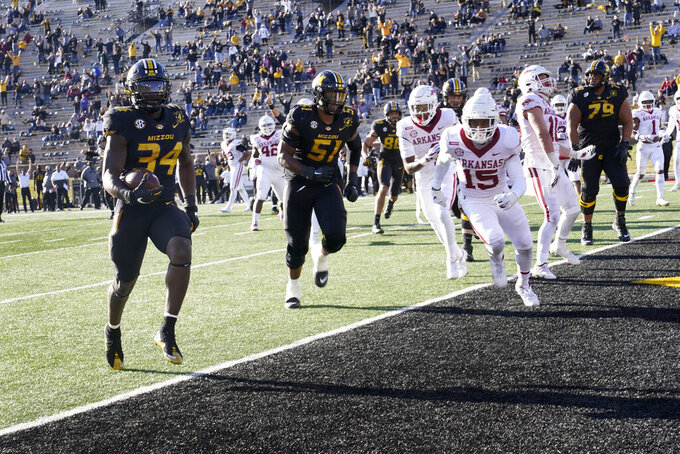 COLUMBIA, Mo. (AP) — When Missouri coach Eli Drinkwitz saw his team fall behind Arkansas on the most improbable 2-point conversion imaginable, he turned to quarterback Connor Bazelak with a simple message.

Bazelak drove the Tigers down the field in the final 43 seconds and then turned the game over to freshman kicker Harrison Mevis, who drilled a 32-yard field goal as time expired to lift Missouri to a 50-48 victory Saturday.

The Tigers (5-3) trailed by 14 points in the fourth quarter, charged back to take a seven-point advantage and then surrendered the lead in the final minute.

Arkansas quarterback K.J. Jefferson, who started in place of the injured Feleipe Franks, threw a touchdown pass to Mike Woods to cut the Missouri lead to one point. Coach Sam Pittman decided to go for 2 rather than tie the game. Jefferson floated a soft pass toward Woods cutting across the back of the end zone. It went right into the hands of Missouri linebacker Jamal Brooks, then right out of Brooks’ hands and into the arms of Woods.

“The last timeout there before we scored, I reminded the team, ‘Hey, I’m going for 2. We’re going to get this 2-point conversion and go home,’ ” said Pittman, whose team had two costly missed PATs earlier in the game. “It was a wild play, but we did get it. And then we couldn’t stop them.”

Bazelak, who completed 32 of 49 passes for 380 yards on the day, quickly moved Missouri 60 yards in seven plays.

“You’re always as a quarterback going to be measured on your game-ending drives,” Drinkwitz said of Bazelak. “That’s the measure of a winning quarterback. For him to get that one today was pretty awesome.”

Mevis, who went 5 for 5 on field goals, said he wasn’t nervous as he lined up for the game-winner, even when Arkansas called two timeouts to ice him.

“It just gives me more time to think about the kick and what to do right,” Mevis said of the timeouts. “Advantage me.”

Arkansas, which trailed 10-0 in the first quarter, regained the lead late in the first half. The Razorbacks tricked the Tigers when holder Jack Lindsey sprinted up the middle for 20 yards on a fake field goal to set up Jefferson’s 1-yard touchdown run on a quarterback sneak.

That gave the Razorbacks a 27-20 halftime lead, which they increased to 40-26 in the fourth quarter before the wild finish. Missouri has beaten Arkansas five straight times.

“I told them at halftime,” Drinkwitz said, “no great story is fun unless you have a little adversity.”

“When your O-Line is pancaking guys, there’s no excuse for not averaging 7 yards a carry,” Rountree said.

THE ONE WHO GOT AWAY

Barrett Banister is from Fayetteville, Arkansas, but he decided to follow a high school teammate to Missouri as a walk-on in 2017. Banister has developed into a dependable wide receiver who Drinkwitz calls “Mr. Consistency.”

Against his hometown team, Banister made six catches for 60 yards, including two big catches on the final drive. Bazelak often looked to Banister for third-down conversions.

Missouri: The Tigers lost their best player — and one of the nation’s best linebackers — to an ejection on a targeting call late in the first half. On a short pass over the middle, Nick Bolton drove his shoulder into Arkansas receiver John David White’s shoulder, causing White to drop the ball and leave the game with an injury. But even before Bolton was ejected, Missouri had no answers for the Razorbacks, who punted on their first drive before scoring touchdowns on their next four possessions.

Arkansas: Before the game, much of the focus was on the expected chess match between Drinkwitz and Arkansas defensive coordinator Barry Odom, who had spent the previous four years as Missouri’s head coach. However, the more pertinent Arkansas assistant was offensive coordinator Kendal Briles. Despite missing their starting quarterback, the Razorbacks found ways to befuddle the Tigers, a team that had held three of its last four opponents to 10 points or less.

“Today was a day where you had to score almost every time you got it,” Pittman said. “We certainly didn’t do that. But for our offensive line, for our offense, that has to be a confidence builder.”

Arkansas: The Razorbacks finish at home next weekend against Alabama.

Missouri: The Tigers will play Georgia at home on Saturday.