Missouri scores in all phases in 50-0 victory over SEMO 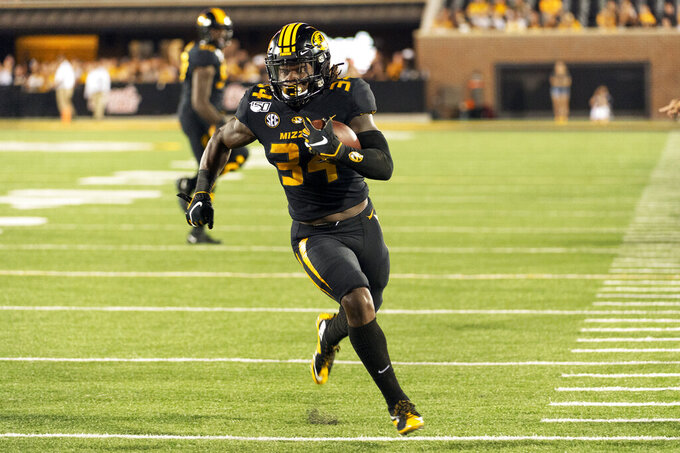 COLUMBIA, Mo. (AP) — After a humbling performance in the season opener, Missouri's defense has taken out its frustration on two straight opponents, including a 50-0 shutout of Southeast Missouri on Saturday night.

"Our defense played with good urgency, made things happen and got off the field on third downs, put them in position behind the sticks most of the night, controlled the line of scrimmage and were really aggressive in our coverage," Missouri coach Barry Odom said.

The Tigers were haunted by missed tackles in their season-opening loss at Wyoming. They rebounded by holding West Virginia to just 171 yards and seven points last week before dominating SEMO.

For the second straight week, Missouri scored a defensive touchdown. This time, linebacker Cale Garrett intercepted a Daniel Santacaterina pass and returned it 27 yards for a touchdown in the first quarter.

That was part of an early all-phases assault by Missouri. The Tigers opened a 27-0 first-quarter lead. In addition to Garrett's score, Larry Rountree III rushed for a 3-yard touchdown, Kelly Bryant floated a 3-yard TD pass to tight end Albert Okwuegbunam and Richaud Floyd took a punt 71 yards to the end zone.

"We have a 0-0 mentality, approaching every drive as a new opportunity, being able to get takeaways, too," Garrett said.

Santacaterina was 7-of-22 passing for 45 yards for the Redhawks. Jake Reynolds had a serious workout with 14 punts.

Floyd was moved from wide receiver to cornerback in the offseason, but that didn't mean his touchdown-scoring days were over. In the first quarter, Floyd fielded a punt on his own 29-yard line, followed his blockers to the right sideline and had just one SEMO player in his way.

Floyd returned two punts for touchdowns as a sophomore, but during an injury-plagued junior year, he finished with three punt returns for minus-4 yards.

"He's a senior, and had every chance in the world to leave and go somewhere else," Odom said. "He continues to make plays. He's as good of a teammate as we've got."

"They had a better week of practice," Odom said. "If you practice the right way and your habits are where they need to be with the urgency, then you're going to be rewarded for it."

Left tackle Yasir Durant left the game in the third quarter with a neck injury, but Odom said he would have returned if the score was closer.

Missouri: The Tigers open Southeastern Conference play at home Saturday against South Carolina. Missouri is in the middle of a five-game homestand.