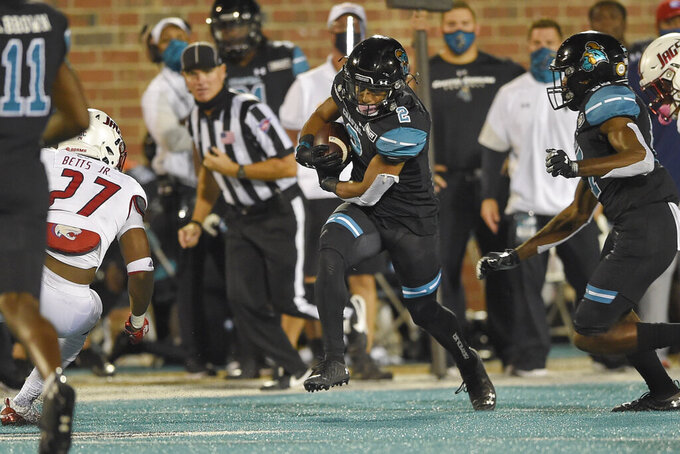 CONWAY, S.C. (AP) — Coastal Carolina coach Jamey Chadwell isn't worried about style points, no matter how high the Chanticleers get in the rankings.

Grayson McCall threw for 203 yards and a score, Massimo Biscardi had three field goals and No. 15 Coastal Carolina improved to 7-0 with a 23-6 victory Saturday night over South Alabama.

Chadwell said his team was not as crisp as it has been in the past. Still, he's grateful for the victory and continuing Coastal Carolina's best-ever start in its short time in the Football Bowl Subdivison.

“I told them that when they have their own kids, there's no ugly baby,” Chadwell said. “It might've been ugly, but we celebrated it just as much.”

McCall completed 16 of 23 passes including a 9-yard scoring pass to C.J. Marable as the Chanticleers (5-0 Sun Belt Conference) outgained the Jaguars (3-4, 2-2) by more than 100 yards and the defense recorded recorded five sacks.

The Chants entered Saturday’s game with an 11-6 advantage in turnover margin to rank 21st in the nation, and a nearly 10-minute advantage in time of possession to rank ninth in the country.

Coastal held a 17-6 lead at halftime and Biscardi kicked a pair of field goals in the second half for the Chants.

Coastal Carolina tailback Reese White said the team showed it has different ways to succeed. A week ago, the Chants were unstoppable offensively in a 51-0 victory over Georgia State. This time, the defense needed to keep South Alabama at bay until Coastal's attack got going.

“We know we're capable of doing good things,” White said. “We've just got to keep holding players to that standard.”

Coastal struck first on its first possession, driving 72 yards in seven plays for a 1-yard touchdown run on fourth down by Shermari White. A key play in the drive was a 46-yard run by Reese White.

DeWayne Betts dropped an interception in the end zone on a pass by Fred Payton, who replaced McCall for one play after McCall’s helmet came off on a run, and CCU made the Jaguars pay two plays later.

Marable's TD catch gave Coastal a14-3 lead late in the first quarter. Jaivon Heiligh had a pair of key receptions in the drive, a 7-yarder on a third-and-5 at the CCU 30 and a 42-yarder that featured a few cuts to evade defenders after receiving a pass over the middle.

They drove 74 yards in 13 plays before a third-down sack by Jeffrey Gunter and C.J. Brewer stalled the drive and forced the Jaguars to settle for a 43-yard Guajardo field goal to pull within eight points.

Brayden Matts tackled Jaguars tight end Trent Tyre a yard shy of a first down on a fourth-and-3 at the CCU 30 with 2:30 left in the half, and Massimo Biscardi kicked a 26-yard field goal to give the Chants a 17-6 lead going into halftime.

CCU linebacker Enock Makonzo forced a fumble that was recovered by linebacker Teddy Gallagher by chasing down wide receiver Jalen Tolbert at the CCU 19, and Coastal all but secured the win with a 72-yard drive that ended with a 27-yard Biscardi field goal.

South Alabama coach Steve Campbell said his team needs to find a way to score points if they hope to compete in the Sun Belt's West Division.

“Offensively, we fought hard, we just couldn't get the ball in the end zone,” Campbell said. “You’re not going to beat the No. 15 team in the country, undefeated team, at their place, kicking field goals and not scoring in the red zone.”

South Alabama: The Jaguars has almost as many first downs (16) as Coastal (18), but were no where close in total yards, getting outgained 445 to 336.

Coastal Carolina: Coastal Carolina’s defense wasn’t as dominant as a week ago against Georgia State. But it still held the Jaguars without a touchdown, to 336 total yards and less than 100 yards rushing with five sacks and two turnovers forced.

The Chanticleers have moved up from No. 25 when they broke into the poll to No. 20 and No. 15 over the past two weeks. Will they move up again after a decent win? Things get harder for the Chants rise given all Power Five conferences have begun playing, meaning voters may give more weight to those higher regarded teams below the Chants as the weeks continue.