No. 2 Georgia LG Solomon Kindley has only mild knee sprain 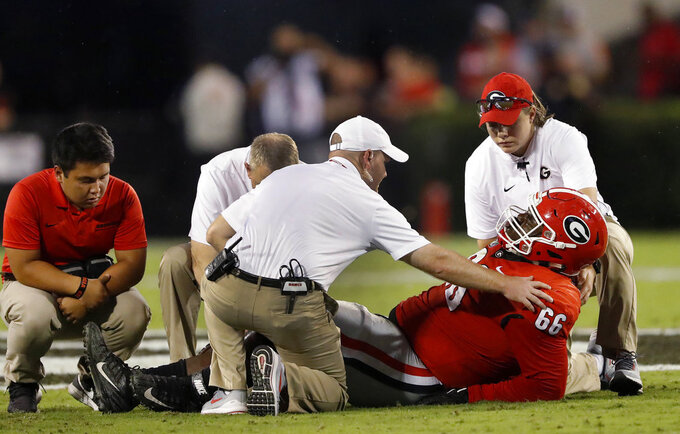 Georgia offensive lineman Solomon Kindley (66) is tended to by the medical staff after being injured during the first half of an NCAA college football game against Vanderbilt on Saturday, Oct. 6, 2018, in Atlanta. (AP Photo/John Bazemore)

ATHENS, Ga. (AP) — Coach Kirby Smart says left guard Solomon Kindley avoided a serious knee injury and could play for No. 2 Georgia in this week's game at No. 13 Louisiana State.

Kindley was carted off the field in the first quarter of Georgia's 41-13 win over Vanderbilt .

Smart said Monday Kindley has a mild sprain of his medial collateral ligament. Smart said more will be known about Kindley's status after he tests the knee in practice.

Smart said the injury "was not as significant as we thought in the beginning." He said Kindley has run on a treadmill and also was cleared for other exercise.