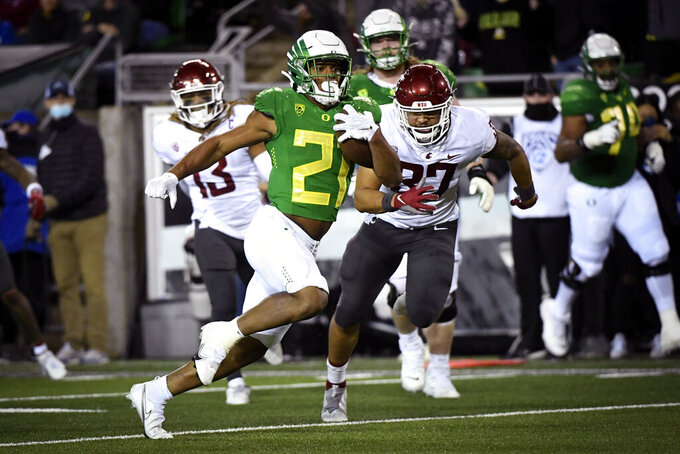 No. 4 Oregon (9-1, 6-1 Pac-12) at No. 24 Utah, Saturday. A potential preview of the Pac-12 Championship game could also have a huge impact on the College Football Playoff. The Ducks are No. 3 in the CFP rankings, behind Georgia and Alabama, one ahead of Ohio State. Oregon is the Pac-12's lone shot at making the CFP, so a loss in Salt Lake City would knock the Ducks out. Oregon can clinch the Pac-12 North with a win and is vying to reach 10-1 for the first time since playing in the national championship game in 2014. The Utes are in control of the Pac-12 North, with a one-game lead and a tiebreaker over second-place Arizona State. Beat the Ducks and Utah wins the South.

UCLA (6-4, 4-3) at Southern California (4-5, 3-4), Saturday. Rivalry games always bring out the best in both teams and the Bruins have the added incentive of putting a dent in the Trojans' hopes of becoming bowl eligible. With Kedon Slovis out with a lower-leg injury, USC will start Jaxson Dart at quarterback. He will be the first USC quarterback to make his first career start against UCLA since Scott Tinsley did it in 1980, but has already seen playing time this season. The Bruins became bowl eligible for the first time since 2017 with a 44-22 victory over Colorado at the Rose Bowl. They have not won at USC since 2013.

Washington State leads all Power Five teams with 22 forced turnovers and 13 fumble recoveries. ... USC WR Drake London was named one of 10 semifinalists for the Biletknikoff Award as the nation's best receiver despite suffering a season-ending ankle injury two weeks ago. He made the list by racking up 88 receptions for 1,084 yards and seven TDs in a little over seven games. ... Arizona State RB Rachaad White has 386 yards rushing and five TDs the past two games.

Oregon DE Kayvon Thibodeaux. The dynamic sophomore has battled injuries this season, but still was named one of three finalists for the Bronco Nagurski Trophy, awarded to the nation's top defensive player. He's been an unstoppable force even facing double teams, with six sacks and 10 tackles for loss this season.

Arizona (1-9, 1-6) at Washington State (5-5, 4-3), Friday. The Cougars are 14.5-point favorites, according to FanDuel Sportsbook, so the oddsmakers are expecting a rout. But the Wildcats have been playing better in recent weeks. They ended a 20-game losing streak with a 10-3 win over COVID-depleted California two weeks ago and gave Utah a much tougher game than expected in last week's 39-28 loss. The Cougars, who can become bowl eligible for the sixth straight season with a win, have lost two of three.