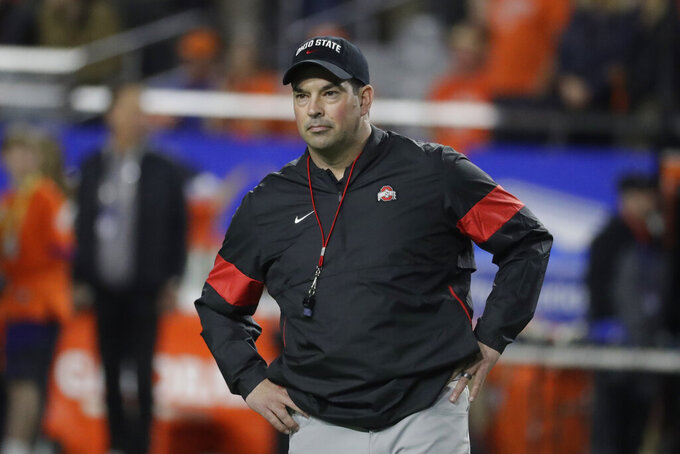 FILE - In this Saturday, Dec. 28, 2019 file photo, Ohio State head coach Ryan Day during the first half of the Fiesta Bowl NCAA college football game against Clemson in Glendale, Ariz. The playoff loss to Clemson that ended Ohio State’s season will sting for a long time, coach Ryan Day acknowledged Wednesday, Jan. 15, 2020. The Buckeyes will move on, but the terrible taste in their mouths will linger and, he hopes, motivate next season's team.(AP Photo/Rick Scuteri, File)

COLUMBUS, Ohio (AP) — The playoff loss to Clemson that ended Ohio State’s season will sting for a long time, coach Ryan Day acknowledged Wednesday. The Buckeyes will move on, and he hopes the terrible taste in their mouths will motivate next season's team.

Ohio State, 13-0 at the time, was beaten 29-23 by Clemson in the College Football Playoff semifinal on Dec. 28, with some calls that went in the Tigers’ favor at critical times and quarterback Justin Fields throwing an interception in the end zone on the Buckeyes’ final drive. Clemson moved on only to be routed by LSU 42-25 in Monday's championship game.

Day, in his first meeting with the media since returning from the Clemson game, joked that was now pondering the loss “every other second as opposed to every second.”

“Especially when the game was played Monday night, right there front and center, it’s hard to let go,” said the first-year coach who was chosen to follow retiring coaching legend Urban Meyer.

“I’m just telling you it’s hard to let go, and we’re not going to let go,” he said. “You have to move on with your life, but at the same time we talked to the team — we’re not going to just flush this. This is going to be here for a long time. And that’s the way it should be. We felt like we had a chance to go win the whole thing, we didn’t do it, so it’s going to stay fresh in our minds.”

The good news for Day is that Heisman Trophy finalist quarterback Justin Fields will be back for another year, along with the core of the offensive line. Among the bad news: Running back J.K. Dobbins moves on to the NFL along with some key receivers and two All-Americans on defense, lineman Chase Young and cornerback Jeff Okudah.

Competition for the spots will begin in earnest with the start of spring practice on March 2. Fourteen incoming freshmen, including quarterbacks CJ Stroud and Jack Miller, enrolled early and will participate in spring workouts. One of them likely will end up as the next starter if Fields moves on to the NFL in 2021.

Master Teague III is the likely replacement for Dobbins, who rushed for 4,500 yards in three seasons. The freshman ran for 759 yards in mop-up duty, but Day said he’ll have to prove he can carry the load as the starter. Proven performers Chris Olave and Garrett Wilson will anchor a corps of receivers that loses K.J. Hill and Binjimen Victor.

Day, 40, did a remarkable job by anyone’s standards and was voted Big Ten coach of the year, an honor never bestowed on Meyer. The New Hampshire native came into the 2019 season as a first-year head coach without a proven quarterback, with a reconstituted offensive line and a leaky defense.

Fields, a Georgia transfer, and the offensive line ended up being terrific, and the defense, behind new coordinators Jeff Hafley and Greg Mattison, developed into one of the best in the nation. The Buckeyes roared through their schedule blowing teams away and playing mostly backups after halftime. Then came Clemson, and a game the Buckeyes had multiple chances to put away but couldn’t.

He said he’s glad the national championship game between Clemson and LSU — led by Ohio State transfer and Heisman Trophy winner Joe Burrow — is over.

“It was hard to watch, I’m not going to lie,” Day said. “It was very difficult. I told the team and the coaches that I wanted everybody to watch that game, as hard it was going to be, from beginning to end and think about things and how badly they want to get back in that game next year, back in that situation, and what are they willing to do, and what are they willing to sacrifice to get there.”