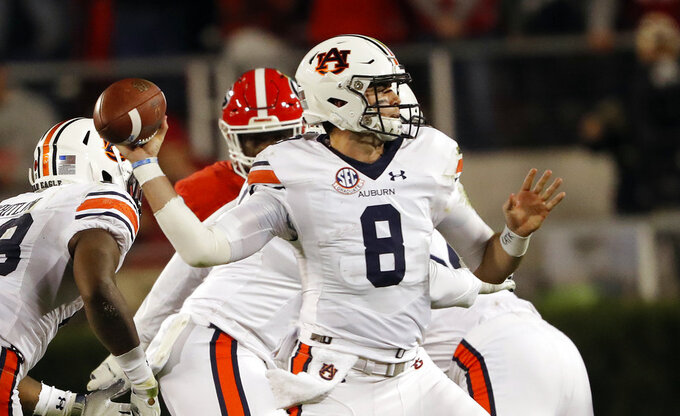 Auburn quarterback Jarrett Stidham (8) looks to throw a pass during the first half of an NCAA college football game against Georgia Saturday, Nov. 10, 2018, in Athens, Ga. (AP Photo/John Bazemore) 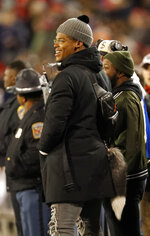 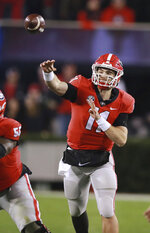 Imagine how opposing defenses must be feeling.

Swift turned in a career-best performance for the second week in a row, rushing for 186 yards Saturday night and breaking loose on a 77-yard touchdown run early in the fourth quarter that finished off No. 5 Georgia's 27-10 victory over Auburn.

The Bulldogs struck for a pair of touchdowns late in the first half to take control.

Swift took it from there, following up a 156-yard effort at Kentucky with an even better game in the Deep South's oldest rivalry.

Not bad for a guy who said he's still bothered by nagging injuries.

Having already locked up a spot in the Southeastern Conference championship game, the Bulldogs (9-1, 7-1, No. 5 CFP) couldn't afford to slip up against the Tigers. They finished with 303 yards rushing — the second straight week they've eclipsed 300 yards on the ground.

It took Georgia a while to get going. Trailing 10-6 with the first half winding down, the Bulldogs faced third-and-4 from the Auburn 14 and the prospect of bringing on kicker Rodrigo Blankenship for a third field goal attempt. But Jake Fromm connected on a touchdown pass to Tyler Simmons that pushed the home team ahead with 2:47 remaining.

Swift broke off a 24-yard run before two short completions left the Bulldogs with fourth-and-3 at the Tigers 38. After letting the clock run down to 29 seconds, Georgia went with no-back alignment and Fromm found Terry Godwin breaking free over the middle.

Godwin hauled in the pass without breaking stride and didn't go down until he tumbled into the end zone for a TD that suddenly pushed Georgia to a 20-10 lead at the break.

Swift tacked on the clinching score, darting through a hole up the middle, brushing off a would-be tackler and finding a clear running lane down the left sideline.

"I don't remember what I did," Swift said with a smile. "I'll probably see it on my phone. But when I'm running, it just comes to me."

Auburn's only touchdown came from a bit of trickery. Out of the wildcat formation, running back JaTarvious Whitlow took a direct snap and threw a 9-yard scoring pass to tight end John Shenker late in the first quarter.

In the end, it was another disappointment in a season that began with such high hopes.

"I'm telling everybody to keep their head up," safety Daniel Thomas said. "We've got to keep playing for each other and stay together."

Auburn: The Tigers failed to build on their comeback victory over Texas A&M, doomed once again by a sluggish offense. Jarrett Stidham missed several open receivers and threw for just 163 yards. The running game showed improvement, finishing with 102 yards, but this performance is sure to keep the heat on offensive-minded coach Gus Malzahn.

Georgia: The offense still looks a bit out of sync, settling for a couple of field goals instead of touchdowns. They'll need to get that sorted out to have any chance against No. 1 Alabama in the SEC championship game. But Swift's emergence is big news for the Bulldogs, giving them a true dual threat in the backfield with Elijah Holyfield, who rushed for 93 yards.

Sophomore defensive end Big Kat Bryant was ejected in the first half after lowering his helmet into a Fromm, a targeting penalty that was especially needless because the Georgia quarterback already was getting sacked when Bryant dove at him head first. The Auburn player also will have to sit out the first half of next week's game against Liberty.

In a rather puzzling move, Georgia tried a fake field goal in the closing minutes with the outcome no longer in doubt.

Blankenship lined up for a 26-yard attempt, but instead received a direct snap and lofted a pass down the middle for Isaac Nauta. The tight end was open, but Blankenship's pass sailed over him by a couple of yards.

Ryan Davis has now caught more passes than any player in Auburn history. His 13 receptions gave him 165 in his career, surpassing Courtney Taylor's mark of 153 from 2003-06.

With the top four schools winning easily Saturday and No. 6 Oklahoma barely surviving against Oklahoma State, Georgia should remain right where it is in The Associated Press rankings.

Both teams have a breather next Saturday before closing out the regular season against their state rivals.

Georgia hosts UMass (4-7), an independent FBS school that was blown out by Boston College in its only game against a Power Five school this season. Auburn returns home to take on FBS independent Liberty (4-5), which will be coming off a 45-24 loss to Virginia.