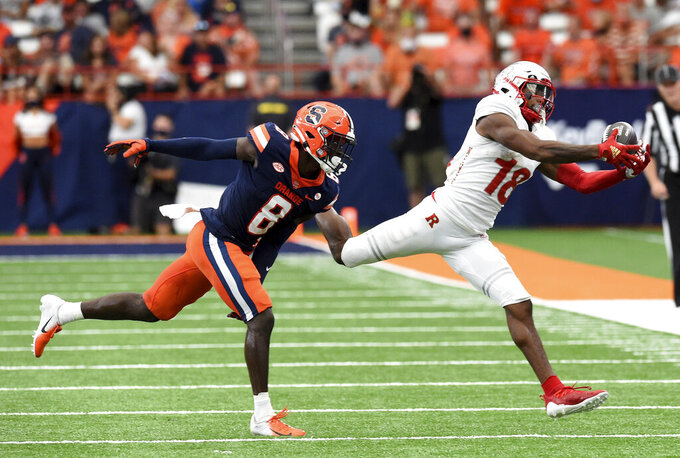 A season that started with a measure of promise for Syracuse suddenly has hit the skids.

The Orange's season-opening win at Ohio seemed like a distant memory after Saturday's 17-7 loss to Rutgers in the first game with fans in the Carrier Dome in 650 days. It was an uninspired start to a three-game homestand against nonconference foes that figured to give Syracuse a chance to show last year's 10-loss season was an aberration.

Six sacks by the Scarlet Knights of the Big Ten — five on starter Tommy DeVito, the other on newcomer Garrett Shrader — brought back unpleasant recent memories for a team that allowed 38 sacks last year and 50 the year before.

“Last year, that doesn’t matter to me,” Orange coach Dino Babers said this week. “The thing that matters is we’re not going to do this again this year. We need to be better. That’s the bottom line.”

The Orange defense played well. It held Rutgers to 198 yards on offense and registered four sacks. But the Scarlet Knights had no turnovers, Syracuse committed three, and Babers was given a costly penalty by the Big Ten officiating crew for questioning a call midway through the third quarter of a scoreless game. The Scarlet Knights scored a touchdown on the next play.

"I didn’t use any profanity, but I guess my English was too strong,” Babers said.

One thing that's lacking is a clear choice at quarterback, and it shows. Syracuse ranks last in the Atlantic Coast Conference in passing (145.5 yards per game) and is one of three Power Five teams without a touchdown pass (Wisconsin and Kansas State are the others).

DeVito entered last season as the starter but missed the final seven games with a foot injury and now has competition in Shrader, a dual-threat transfer from Mississippi State.

“My biggest thing is I want somebody to win it on the field," Babers said. "Remove all doubt. Don’t leave the decision up to me. They need to get it done.”

DeVito is in his fourth season and has had the bulk of the playing time so far, going 26 of 43 for 241 yards. After playing just the final 2:29 of the opener, Shrader was 4 of 6 passing for 42 yards against Rutgers.

“We decided we were going to play him (Shrader) in the second quarter no matter what," Babers said. "The previous game we went by feel. We want to see him out on the field. To do that, you have to make a commitment. I definitely think that we still want to see both of those guys. We’re looking to score points. Until we’re 100 percent sure who it is, we need to keep letting them compete.”

One of Syracuse's most effective offensive weapons is tailback Sean Tucker, who emerged last year as a freshman. He tied Saturday's game with a 24-yard burst through would-be tacklers. Remarkably, that was his last carry in the game, though he did catch two passes for 8 yards in the fourth quarter. He finished with 54 yards rushing on 13 carries a week after he had 25 rushes for a career-high 181 yards.

Syracuse's 29-9 win at Ohio, which was picked in the preseason to finish second in its division of the Mid-American Conference, was a welcome start to the season. But some of the shine came off that victory after the Bobcats lost again at home — this time to Duquesne of the Northeast Conference.

Next up for Syracuse (1-1) on Saturday is its first-ever meeting with in-state opponent Albany (0-2), a football-only member of the Colonial Athletic Association.

“We can’t go into this week still thinking about the game we just lost," defensive end Josh Black said Tuesday. "We have to flush it. Let’s get better, let’s see what we need to improve on. Little things, big things, finding ways to improve ourselves so this ultimately doesn’t happen again.”