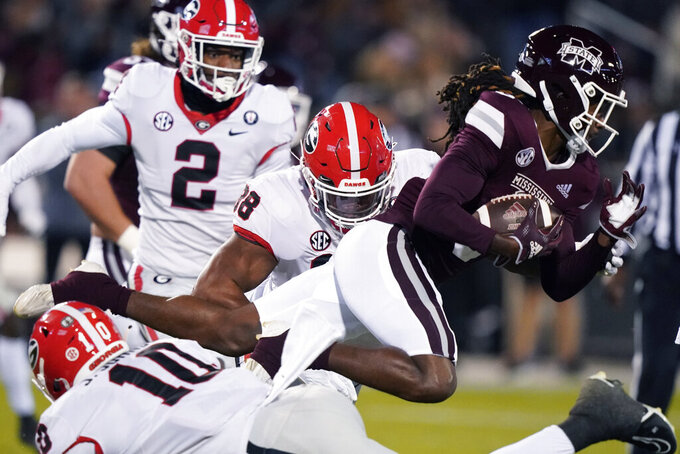 LEXINGTON, Ky. (AP) — Not long ago, Georgia and Kentucky were both unbeaten and seemingly on a collision course for SEC East supremacy.

The top-ranked Bulldogs (10-0, 7-0 SEC, No. 1 CFP) have lived up to expectations, rolling to another division title with an eye on clinching a second consecutive undefeated finish in league play. Not so much for the Wildcats (6-4, 3-4), who have lost four of six since a 4-0 start and No. 7 ranking, including last week’s embarrassing 24-21 defeat by last-place Vanderbilt.

Kentucky aims to regroup on multiple levels, desperation that reminds Georgia to finish the job and not look ahead to next month’s meeting in Atlanta against No. 6 LSU (No. 6 CFP) for the SEC title and a berth in the College Football Playoff.

“We really haven’t talked about the SEC championship game,” Georgia coach Kirby Smart said. “This is not our conversation. We keep our conversation relative to what’s one foot in front of us and it’s never been mentioned as a goal, nobody talks about that. We talk about Kentucky.”

Georgia is coming off a 45-19 rout at Mississippi State that squelched concern about a letdown after thumping then-No. 2 Tennessee. The Bulldogs rolled up 468 yards on offense in Starkville and held the “other” Bulldogs to 263 yards passing.

The ’Dawgs have won the last 12 against the Wildcats, who are eager to move on from arguably their worst performance under 10th-year coach Mark Stoops. Kentucky was flat in every phase against the Commodores and are now tied for third in the East.

Now comes the monumental task of stopping a Bulldogs squad that ranks no worse than third in most every SEC statistical category and boasts its No. 2 passer in quarterback Stetson Bennett.

“They are awfully impressive in every way, shape or form,” Stoops said. "They deserve to be where they’re at and we have a great challenge ahead for us.”

Pass protection remains a concern for Kentucky, which yielded four sacks last week to Vandy and is tied for 126th of 131 FBS teams with 39 allowed. Improvement is needed against the SEC’s top defense, though Georgia's is tied for 10th in the SEC with 17 sacks.

Tight ends Brock Bowers and Darnell Washington play a big role in Georgia’s passing game. Senior receiver Kearis Jackson doesn’t mind if it takes away from his stats. Bowers is second on the team behind receiver Ladd McConkey with 39 catches, producing a team-high 615 yards through the air along with four touchdowns. Washington has 24 receptions for 392 yards and one score. Jackson, meanwhile, has just 18 catches for 246 yards with no TDs.

“I’m here to win games. I’m not here to have 1,000 yards, 20 touchdowns,” Jackson said. “If I wanted to come in for that, I would have went somewhere else. But I’m trying to put championship years on our walls and trying to be a national champion, an SEC champion.”

Kentucky running back Chris Rodriguez Jr. has moved on from an early-season suspension to again show his overpowering form. The All-SEC first-teamer has rushed for 733 yards and six touchdowns in six games, ranking seventh and 10th respectively in the conference. He’s just 362 yards from tying Sonny Collins (3,835 yards) for second in school history.

Kentucky quarterback Will Levis threw for just 109 yards without a TD against Vanderbilt, his second scoreless performance in three games. He’s sixth in SEC passing with 2,102 yards and 16 touchdowns but needs a big turnaround after his second-lowest output this season, which led to the QB expressing frustration on the sideline and in postgame interviews. Stoops chalked it up to his competitiveness.

“He really is a guy that cares deeply about this place, his legacy and the way he performs for his team, and I feel for him, too," he said. "I need to do a better job for him, too, and we need to play better for him. We are all in this together, so he is not concerned about that.”

Georgia’s division title is its fifth in the last seven years under Smart, who’s compiled a record of 68-10 since going 8-5 in his first season as Bulldogs coach in 2016. Asked what it takes to keep playing at such a high level year after year, Smart cited consistency, commitment, physicality and maturity. But the Bulldogs barely acknowledged their latest division title.

Said Smart, “There’s a lot of things left out there for this team to do.”