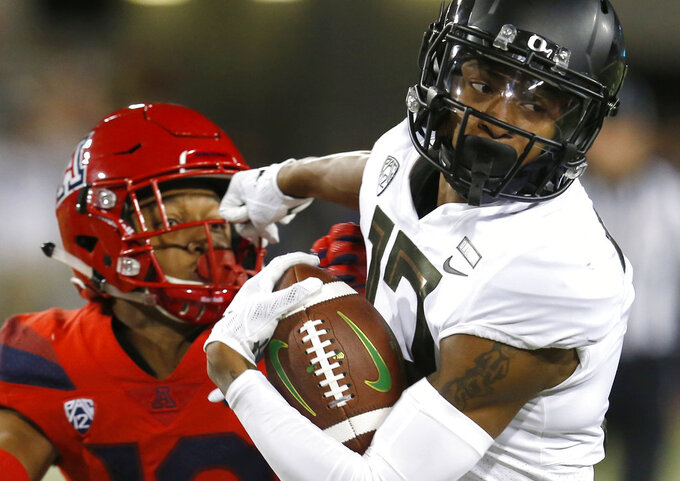 FILE - In this Oct. 27, 2018, file photo, Oregon wide receiver Dillon Mitchell (13) during an NCAA college football game against Arizona, in Tucson, Ariz. Justin Herbert is one of the league's better passers. Herbert has thrown for 2,333 yards and 22 touchdowns while completing 59 percent of his passes. Herbert's top target, Mitchell, leads the Pac-12 with 833 yards and six touchdowns on 56 catches. (AP Photo/Rick Scuteri, File) 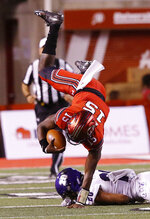 SALT LAKE CITY (AP) — The big question facing Utah when it hosts Oregon is whether Jason Shelley can pick up where Tyler Huntley left off.

Shelley, a redshirt freshman, will make his first career start Saturday against the Ducks in place of Huntley, who broke his collarbone in the third quarter of Utah's 38-20 loss last week to Arizona State.

Shelley struggled after being thrown into action against the Sun Devils. He threw for 59 yards and an interception on 4-of-11 passing. With a full week of taking reps as a starter in practice, and having the game plan adjusted to fit his individual strengths, Utah's coaches are confident Shelley can produce better results against the Ducks.

Utah coach Kyle Whittingham said Shelley is similar to Huntley in his running and passing skill set. Whittingham said the freshman also brings a fearless attitude that will help the offense adjust to Shelley quicker.

"One thing is he's very calm under pressure," Whittingham said. "Not that Tyler is not, but his demeanor is very even-keeled. He doesn't panic and doesn't press."

The Utes will need Shelley to adjust to his new role quickly after losing Zack Moss to a knee injury. Moss suffered the injury at practice Wednesday and now will require season-ending surgery.

It's a big blow to the Utah offense. Moss ranks third in the Pac-12 in rushing yardage with 1,092 yards. His 6.1 yards per carry are second-best among running backs in the league.

Oregon expected Moss to be the top concern for its defense Saturday. Even with the Utes missing a pair of key playmakers, the Ducks don't count on it making things go any smoother with Utah.

"With Utah, which is a great football program, it starts and ends with their physicality on both sides of the ball," Oregon coach Mario Cristobal said. "Up front, by the truck load, they have big powerful guys that set the tone for the game. That's always been part of their identity."

The Ducks will give Utah's defense plenty of things to worry about as well.

Justin Herbert is one of the league's better passers. He has thrown for 2,333 yards and 22 touchdowns while completing 59 percent of his passes. The junior lit up the Utes two years ago in a 30-28 win for Oregon in Salt Lake City, throwing for 324 yards and three touchdowns.

Herbert's top target, Dillon Mitchell, leads the Pac-12 with 833 yards and six touchdowns on 56 catches. Mitchell has tallied at least 500 yards more than any other Oregon receiver this season and has a league-best 735 receiving yards on 50 catches in Pac-12 play.

"We'd like to spread it around more, but Dillon just does a great job of getting open," Herbert said. "He runs great routes and is able to identify the coverage and adjust and do things that get him open."

Other things to note ahead of this week's game between Oregon and Utah:

COVEY'S IMPACT: Oregon needs no introduction to how Britain Covey can impact a game. Covey played a huge role in lifting Utah to a 62-20 road victory over the Ducks in 2015. He had a pair of touchdown receptions and also famously faked out Oregon to set up a punt return touchdown.

Covey leads Utah this season with 555 yards on 50 receptions. He has tallied 85 yards on 10 carries and has thrown for 71 yards and two touchdowns on 3-of-3 passing.

DAVEY O'BRIEN SEMIFINALIST: Herbert was named one of 16 semifinalists for the Davey O'Brien Award. He and Washington State quarterback Gardner Minshew are the only semifinalists from the Pac-12. Herbert made his 24th career start in Oregon's 42-21 win over UCLA and became the fastest Ducks player to reach 6,000 career passing yards in terms of starts.

PROVIDING A SPARK: Ugochukwu Amadi's versatility is invaluable to Oregon on defense and special teams. Amadi is the only FBS player to score touchdowns off a punt return and an interception return this season. He has returned two interceptions for touchdowns and is tied for second in the Pac-12 with three interceptions. Amadi is also tied for the FBS lead with two punt returns over 50 yards. The senior has gained 20 or more yards on four of eight punt returns.

RED ZONE LOCKDOWN: Scoring in the red zone has been hit or miss for the Ducks at times this season. Their conversion rate (31-of-38) ranks ninth in the Pac-12. It could play in Utah's favor. The Utes lead the nation in red zone defense. They have allowed 15 scores on 27 attempts.