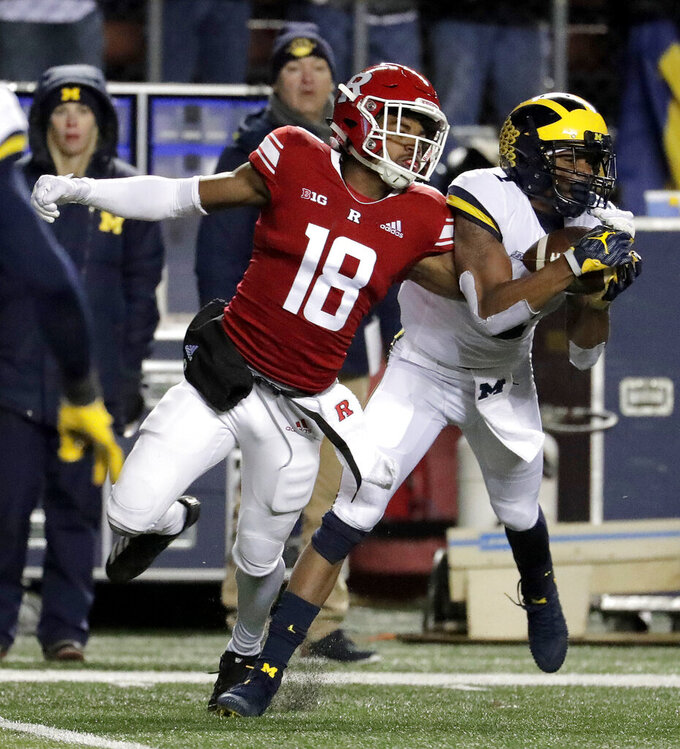 FILE - In this Saturday, Nov. 10, 2018, file photo, Michigan defensive back Ambry Thomas, right, intercepts a pass from Rutgers quarterback Artur Sitkowski which was intended for wide receiver Bo Melton, left, during the second half of an NCAA college football game, in Piscataway, N.J. Thomas' career highlight is returning a kickoff 99 yards for a touchdown against Notre Dame. Now, in 2019, he gets his opportunity at corner, where he was a four-star recruit and one of the nation’s top prospects in 2016. (AP Photo/Julio Cortez, File)

WRs Nick Westbrook and Donovan Hale, seniors. Westbrook, who missed 2017 with an ACL tear, showed glimpses of his pre-injury talent last season but not the gaudy numbers. Hale emerged as a legitimate go-to receiver. Together, the 6-foot-3 Westbrook and 6-4 Hale should give Indiana one of the Big Ten's most physical receiving tandems.

RB Anthony McFarland, sophomore. He started five games as a freshman yet still managed to top the 1,000-yard mark. He raised eyebrows around the Big Ten after running for 298 yards against Ohio State. Now he's poised to become one of the league's dominant backs.

CB Ambry Thomas, junior. His career highlight is returning a kickoff 99 yards for a touchdown against Notre Dame. Now he gets his opportunity at corner, where he was a four-star recruit and one of the nation's top prospects in 2016. He'll play opposite high school teammate Lavert Hill.

S Xavier Henderson, sophomore. He's the heir apparent to the starting strong safety job. Henderson was the Spartans' only true freshman to play in all 13 games, mostly at nickelback on third downs. He's looking to build on a season in which he made 15 tackles, recovered a fumble and excelled on special teams.

WR Garrett Wilson, freshman. The early enrollee impressed with his maturity and appears to have the makings of a star. Wilson created buzz in the spring game when he out-jumped a defensive back for a long touchdown catch. There are a number of receivers ahead of Wilson, but it might not take long for this five-star recruit to emerge.

S Lamont Wade, junior. The Nittany Lions need to find a replacement for Nick Scott, and Wade is among the top candidates after playing a reserve role his first two years. He showed up in Happy Valley as a four-star recruit at cornerback but was moved to safety before his sophomore year.

RB Isaih Pacheco, sophomore. Playing in Raheem Blackshear's shadow, Pacheco had 551 yards on 111 carries and scored three touchdowns. If Blackshear splits time in the slot and at running back, Pacheco will see increasing opportunities for an offense looking to improve its No. 106 ranking in rushing.

OL Verdis Brown, redshirt freshman. The 6-foot-4, 325-pounder is switching to the offensive line after spending his first season as a redshirt on the defensive line. The Chicago native was a four-star offensive line recruit, and he had offers from a bevy of major programs. His move to the O-line, where he's projected to be a guard, is a boost for an area always lacking depth.

LB Dillon Doyle, redshirt freshman. The Iowa City native performed well enough this spring to challenge for a spot in the linebacker rotation. He appeared in four games last season, preserving his redshirt, and had two tackles while playing mostly on special teams.

LB Thomas Rush, sophomore. He played running back in high school, so it has taken him some time to get a feel for playing on the other side of the ball. He saw spot duty backing up MLB Thomas Barber last season, but there's a starting spot open on the outside with the departures of Blake Cashman and Julian Huff.

WR Andre Hunt, redshirt freshman. The Huskers are looking for a complement to JD Spielman in the wake of Stanley Morgan Jr.'s departure, and Hunt could be the guy. He struggled with focus and was prone to drops last season. Offensive coordinator Troy Walters says Hunt was the most consistent pass-catcher this spring.

CB Cam Ruiz, sophomore. Ruiz was a solid backup to Montre Hartage last season and is ready to take a leadership role. He got a good amount of experience because of injuries in the secondary and made 26 tackles, broke up four passes, forced a fumble and recovered one.

DT Lorenzo Neal, senior. Yes, Markus Bailey led the Boilermakers in tackles last season. And, yes, Purdue will still have a wide-open offense. If the Boilermakers want to contend for a title, they can't continue to give up 450 yards and 30 points a game. That means they need more out of the 315-pound Neal up front.

LB Leo Chenal, freshman. The 2018 Wisconsin Gatorade Player of the Year has been a playmaker all spring, meriting his promotion to No. 2 inside linebacker. At 6-2, 239 pounds, he appears physically ready. In three open practices, he picked off two passes and returned one for a touchdown.