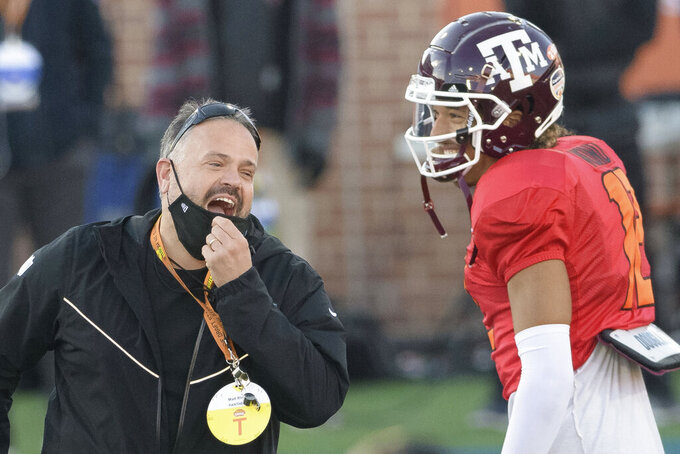 MOBILE, Ala. (AP) — Mac Jones’ last game was for a national championship. The next game he plays is for his NFL draft stock, provided the Alabama quarterback's gimpy left ankle is good to go.

Jones headlines a group of quarterbacks from high-profile programs at Saturday’s Senior Bowl, 19 days after the Crimson Tide beat Ohio State in the title game.

The Heisman Trophy finalist sat out the end of Thursday's final practice of the week after hurting his ankle, leaving his status for the game uncertain. Senior Bowl executive director Jim Nagy said the plan is for Jones to dress out and see how his ankle feels.

“The goal is for him to play,” Nagy said in a text message Friday. “He's a true competitor."

Jones is also the biggest name — especially in this state — and almost certainly the top quarterback prospect at the game.

Jones wasn't regretting coming to the game and working with Matt Rhule and the Carolina Panthers staff even with minimal time to recuperate from the season.

“Just being in that room, I already learned so much about NFL football,” he said. "They made me better this week.

“I’ve really enjoyed it and I’m super happy I came.”

If healthy Jones, considered a potential first-round pick, would lead the American team along with two other passers with Southeastern Conference connections. He’s joined by Texas A&M quarterback Kellen Mond and former Wake Forest standout Jamie Newman, who transferred to Georgia before ultimately opting out because of the COVID-19 pandemic.

The National team is led by Texas quarterback Sam Ehlinger, Notre Dame’s Ian Book and Feleipe Franks, who transferred from Florida to Arkansas for his final season.

Heisman finalist Kyle Trask, Franks’ replacement at Florida, was scheduled to play but pulled out because of an ankle injury.

In Jones' one full season as starter he made the most of his opportunity. Mond started 44 games for the Aggies, Ehlinger logged 43 starts for the Longhorns,

Mond led the Aggies into College Football Playoffs contention in his final season. After throwing 24 interceptions his first three seasons, Mond was only intercepted three times in 10 games.

“I think in a lot of people’s opinion, the SEC is the closest thing to NFL calibre players,” he said. “Obviously being able to compete at that level is definitely a huge blessing for me.”

Book was a finalist for the Manning Award and Johnny Unitas Golden Arm Award, both won by Jones. He knows the lack of a combine and in-person visits “just makes every little thing more important," certainly including the Senior Bowl.

“This is more important, the pro day is more important, and it’s about taking every rep one at a time and going out and competing,” Book said after a practice this week. “I had a really good time today competing with the best of the best. That’s why you play football.”

Alabama tailback Najee Harris practiced early in the week but won't play in the game because of a lingering ankle injury from the title game.

Jones is hoping to be able to play after setting Alabama records with 4,500 yards and 41 touchdowns this season. He succeeded the much more heralded Tua Tagovailoa, who wound up going fifth to the Miami Dolphins in the last draft.

“I don’t think I needed to prove anything,” Jones said. “The tape is the tape, and I did what I did and obviously I had a great team. I just wanted to come and kind of learn more about NFL football and learn a new playbook, which I thought I did a good job with. I understand all the plays.”

Now, his ankle is the big question for the game.