Alabama's O-line comes up big in SEC championship vs Georgia 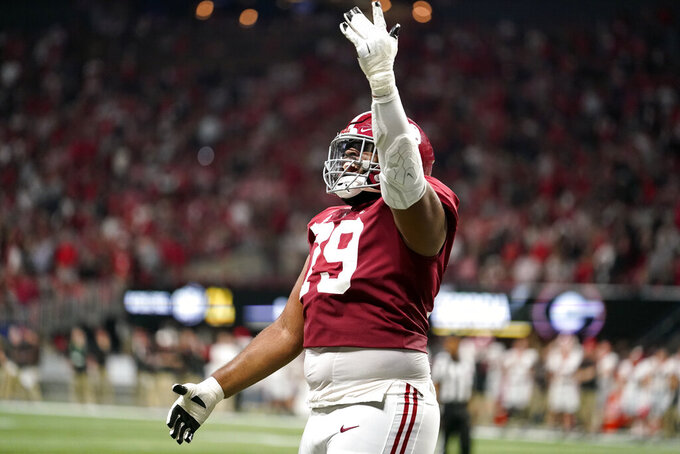 ATLANTA (AP) — Alabama's blockers went from being bullied to dominant in the span of a week.

The fourth-ranked Crimson Tide's offensive line rose to the occasion against No. 1 Georgia's heralded defensive front in a 41-24 Southeastern Conference Championship game victory on Saturday that sealed a playoff spot.

It was a marked turnaround for a team that gave up seven sacks against a lesser defense at Auburn last weekend and took more than 59 minutes to score its first touchdown before winning 24-22 in quadruple overtime.

It was also a resounding response in a matchup that appeared to favor the Bulldogs.

“I think the offensive line really answered the challenge that we put to them in terms of them being more physical in this game,” Tide coach Nick Saban said. “They probably prepared a little better than I’ve ever seen them all season long in terms of studying the guys they had to block and the things they had to do.”

The final tally: Zero sacks against a line led by Jordan Davis and Devonte Wyatt, and four tackles behind the line for a total loss of just 6 yards.

Quarterback Bryce Young was mostly well protected and able to add to his Heisman Trophy credentials with a huge game. He passed for 421 yards and three touchdowns, hitting Jameson Williams seven times for 184 yards and two touchdowns.

John Metchie III was having a huge game, too, before leaving with an apparent left knee injury late in the first half that could end his season.

The players will get the glory, as usual. But their performances came on the shoulders of the big men in trenches who more than did their part.

To Young, the line's performance “was everything.”

“Obviously, that’s a great front, a great defense, and we knew that coming in,” he said. "I think they just kept hearing it and hearing it. They accepted the challenge, and they really stepped up to the plate in the biggest moment in the season."

Alabama also used different protections, even if it meant sending fewer players out in pass routes. It worked.

The Tide line had endured injuries and then some shuffling due to another late-season injury to center Darrian Dalcourt that forced Chris Owens to move from right tackle to his old position.

The running game wasn't heavily featured with a hobbled Brian Robinson Jr. and several tailbacks also sidelined. But with his left calf taped up, Robinson did find enough room to grind out 55 yards after his status was uncertain all week with an injury that took him out the four-overtime win over Auburn.

It was a rebuilding year on the line, despite having a projected first-round pick in left tackle Evan Neal. The Tide lost three linemen to the NFL draft last season, including first-round tackle Alex Leatherwood, second-round center Landon Dickerson and late-rounder at guard Deonte Brown.

The current group did more than just hold their own against the Bulldogs. Saban said Alabama's 536-yard offensive performance “started up front.”

“Their front has been so dominant in terms of pressuring people, kind of taking them out of their game,” he said. "You could never, ever really get the ball out very successfully on a very consistent basis, which is a tribute to them, their scheme. Their players are very good.

“It still goes back to the offensive line did a very, very good job of allowing us to get the ball down the field.”