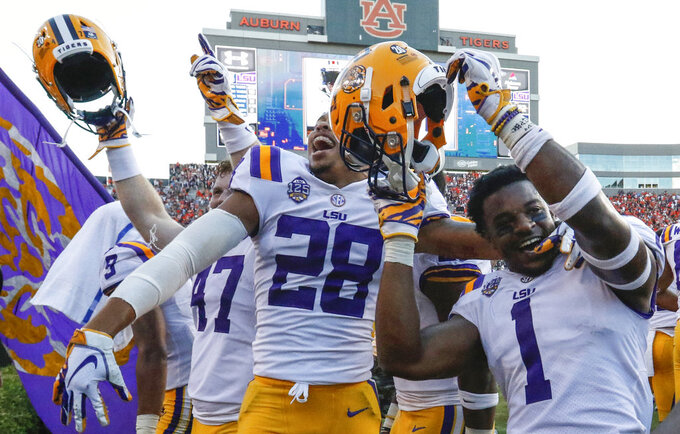 LSU players celebrate after they defeated Auburn on a last second field goal during the second half of an NCAA college football game, Saturday, Sept. 15, 2018, in Auburn, Ala. LSU won 22-21. (AP Photo/Butch Dill)

LSU surged to No. 6 in The Associated Press college football poll after its second victory of September against a highly ranked team, and Wisconsin tumbled to No. 18 after becoming the first top-10 team to be upset by an unranked team.

Top-ranked Alabama strengthened its hold on No. 1 on Sunday , receiving a season-high 58 first-place votes from the media panel. Clemson slipped out of the No. 2 spot for the first time this season. Georgia moved up a spot to second behind the Crimson Tide, giving the Southeastern Conference the top two teams in the ranking. Clemson is third with three first-place votes, followed by No. 4 Ohio State and No. 5 Oklahoma.

The Tigers beat Miami, the preseason No. 8, in Week 1 in Arlington, Texas, and then knocked off Auburn on Saturday at Jordan-Hare Stadium. Auburn slipped from No. 7 to No. 9.

Wisconsin's loss to BYU was Saturday's most surprising result. The Badgers were three-touchdown favorites but missed a last-second field goal to tie and lost 24-21 in Madison. The Big Ten had five teams in the top 14 to begin the seasons and three (Michigan, Michigan State, Wisconsin) have already lost.

BYU's reward was being ranked No. 25.

The Big Ten drew a lot of attention for having a rough Saturday, with half the league losing nonconference games. The Pac-12, more specifically the Pac-12 South, also had a rough one — though much of the damage was done after a lot of East of the Mississippi bedtimes.

Southern California fell out of the ranking after its second straight loss, a thumping at Texas. The Trojans have now been outscored 54-17 the last two weeks. Arizona State also fell from the ranking when it could not back up its nice home win against Michigan State, losing at San Diego State.

Within the conference, Utah was beaten at home by Pac-12 North power No. 10 Washington, thwarting the Utes' chances of being ranked. UCLA dropped to 0-3 under Chip Kelly and Arizona finally managed to get coach Kevin Sumlin a victory — by beating Southern Utah of the FCS.

Colorado is the lone unbeaten Pac-12 South team. Looks bleak, but just two seasons ago the landscape was similar for the division. After opening-week losses by USC and UCLA to start 2016, the Pac-12 South had no ranked teams. Ultimately, Colorado, the eventual Pac-12 South champ, and Utah moved into the ranking and finished in the Top 25. USC made a late-season surge behind Sam Darnold, too.

The other big mover in the right direction this week was Oklahoma State. The Cowboys jumped nine spots to No. 15 after an impressive 44-21 victory against Boise State, which tumbled out of the rankings after being No. 17.

Oklahoma State began the season unranked after being ranked at the end of the last three seasons.

The Eagles beat Wake Forest on Thursday night to improve to 3-0 behind a dynamic offense led by running back A.J. Dillon and blossoming quarterback Anthony Brown. BC has not won more than seven games since 2009. The 2008 team won nine and the ACC Atlantic Division but was last ranked on Nov. 30 of that year.

The SEC has the top two teams in the AP poll for the 23rd time since 2006. Alabama was either No. 1 or 2 in all of those. The conference with the next most 1-2 appearances in the poll since 2006 is the Big Ten with eight.

No. 22 Texas A&M at No. 1 Alabama. First ranked opponent for the Crimson Tide.

No. 7 Stanford at No. 20 Oregon. First Power Five opponent for the Ducks.