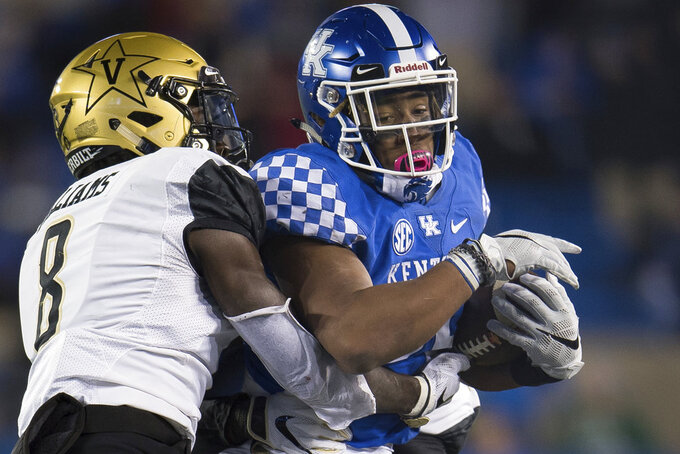 Here are a few things to watch during Week 10 of the Southeastern Conference football season:

No. 1 Alabama at No. 4 LSU: It's almost always a big game when the Crimson Tide and Tigers meet, but the stakes are even higher than usual for this matchup at Tiger Stadium. Alabama (No. 1 College Football Playoff) has looked unstoppable, especially on offense, and quarterback Tua Tagovailoa is among the front-runners for the Heisman Trophy. LSU (No. 3 CFP) has been impressive while navigating a difficult schedule. Coach Ed Orgeron has exceeded expectations since coming to Baton Rouge, and Saturday's game against the Tide represents a huge opportunity .

Georgia offense vs. Kentucky defense: No. 6 Georgia (No. 6 CFP) visits No. 11 Kentucky (No. 9 CFP) with the SEC East title at stake. Kentucky, which has never reached the SEC championship game, is in this position because of a defense that features conference sacks leader Josh Allen. Kentucky is allowing 13 points per game to match No. 2 Clemson (No. 2 CFP) for the Football Bowl Subdivision lead in scoring defense. Georgia averages 38.6 points to rank second in the SEC and 20th among all FBS teams in scoring. Georgia quarterback Jake Fromm is fifth among all FBS players in passing efficiency.

Kentucky is the only FBS team that hasn't allowed more than 20 points in a game this season. ... In a 15-14 loss to Kentucky last week , Missouri went three-and-out in all eight of its second-half possessions. ... Alabama has gained over 500 yards in each of its eight games this season. This marks the first time Alabama ever has compiled 500-plus yards of offense in eight straight games. ... LSU has lost its last seven meetings with Alabama since a 9-6 victory over the Crimson Tide in 2011. LSU hasn't scored more than 17 points in any of those games. ... No. 25 Texas A&M (No. 20 CFP) has controlled the ball for 36 minutes, 11 seconds per game. Army is the only FBS team to average more possession time. ... No. 21 Mississippi State (No. 18 CFP) has allowed opponents to score touchdowns on just 22.7 percent of their trips to the red zone, the lowest percentage in the nation. Auburn (26.1 percent) ranks second in that category. Every other FBS team is allowing opponents to score touchdowns on at least 40 percent of their red-zone drives.

Auburn is a 4-point favorite at home against No. 25 Texas A&M, which is a bit surprising because the Tigers are one of the league's most disappointing teams. The Aggies (No. 20 CFP) are coming off a 28-13 loss to Mississippi State , but had a three-game winning streak before that setback.

IMPACT PERFORMER: Alabama's Jerry Jeudy has caught 31 passes for 777 yards, good for an average of 25.06 yards per catch that leads all FBS players. He also has 10 touchdown catches, putting him in a tie for third nationally. He gains an average of 9.7 yards after catch to rank second in the nation, according to Pro Football Focus. Jeudy will try to keep up that torrid pace against LSU when he has a likely one-on-one matchup with Greedy Williams, one of the nation's top cornerbacks.