BC coach Hafley wants to end QB shuffle against Hokies 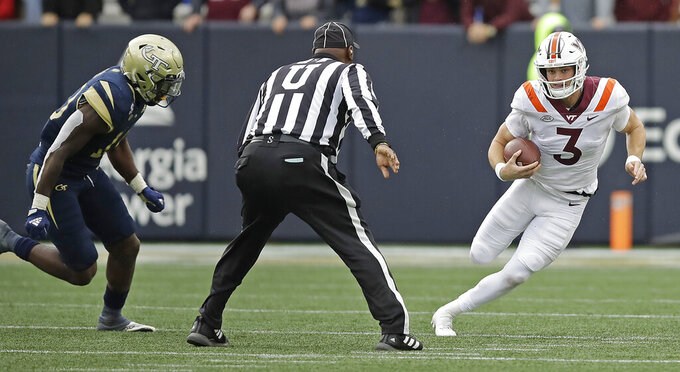 BOSTON (AP) — Boston College coach Jeff Hafley has picked a winner in his quarterback competition. He's just not saying who it is.

After shuffling Dennis Grosel and Emmett Morehead in and out during last week's 21-6 loss at Syracuse, Hafley said “I'd like it to be one guy” against Virginia Tech (4-4, 2-2 Atlantic Coast Conference) on Friday night.

“It could be two, but I'd like it to be one," Hafley said. “I want to give the guy a chance to go play, but if something happens where we have to change it up, I don’t want you guys to think I was lying.”

Hafley thought he had his quarterback problem solved two years ago when Pennsylvania prep phenom Phil Jurkovec transferred from Notre Dame. He led BC to a 6-4 record in 2020, but this year he was knocked out in Week 2 with what is expected to be a season-ending wrist injury.

In came Grosel, a former walk-on who led BC (4-4, 0-4) to wins over three non-Power 5 schools and Missouri before losing to a pair of ranked teams, Clemson and North Carolina State. After a third straight loss, to Louisville, Hafley went with a rotation last week against Syracuse.

Grosel started and played the first two drives: one ended on downs at the Orange 24 yard-line, the other was a three-and-out. Morehead, a freshman, ran the four second-quarter possessions, which resulted in a field goal and three punts.

Grosel got two more tries in the third quarter, which led to a field goal and a three-and-out. Then came Morehead again with two three-and-outs sandwiched around a longer drive that ended with a punt on fourth-and-40. Back to Grosel, who was handed the ball on the Syracuse 19 and led BC to the 1 before the Eagles failed to punch it in from there.

“I don’t know what direction they’ll go," said Hokies coach Justin Fuente, whose team is in a stretch of four games out of five on the road after starting with six out of seven at home. "I don’t know that there’s a huge disparity between what their approach is between those two guys. We’ll have to be ready for whatever we’ll see.”

Here are some other things to look for in Friday night's game:

Morehead's playing time against Syracuse was his first real game action since 2019.

The 6-foot-5, 229-pounder from Alexandria, Virginia, only started playing as a high school sophomore and lost his senior season to the pandemic. He was a spring arrival at BC, giving him a head start on the playbook and the system.

Morehead said that since he arrived in Chestnut Hill, Grosel has been “probably the best mentor I can ask for.”

“He’s helped me so much with everything, from the playbook to navigating Boston College, and just college in general. He’s been super-nice about everything,” Morehead said. “Like, obviously, this is his season to shine and to play, and it hasn’t gone the way he’s wanted. But you would never know it. He’s been really calm, and really humble, and someone I look up to.”

Virginia Tech back Malachi Thomas has run for over 100 yards in consecutive games, giving the Hokies a ground presence that had been lacking. He ran for 151 yards and three touchdowns in a 41-36 loss to Syracuse and gained 103 yards on 25 carries last weekend in a road victory at Georgia Tech, which snapped a three-game losing streak.

Boston College will be wearing its special red bandana-trimmed uniforms for the game, continuing a tradition to honor BC graduate Welles Crowther.

A former lacrosse player who was working in the World Trade Center on Sept. 11, 2001, Crowther died helping to rescue people during the attack. Survivors identified him by the red bandana that he was known for wearing at all times.

BC upset No. 9 Southern California in the first Red Bandana Game in 2014, helping the tradition take hold. The Eagles also wore the red bandana uniforms on Sept. 11 against UMass this year, but Friday night is the official Red Bandana Game.

“I think it’s an awesome tradition," Hafley said. “And in my opinion Welles represents so much about what’s right in the world and what’s right about Boston College.”