Beavers batter Trojans for first win in Coliseum since 1960 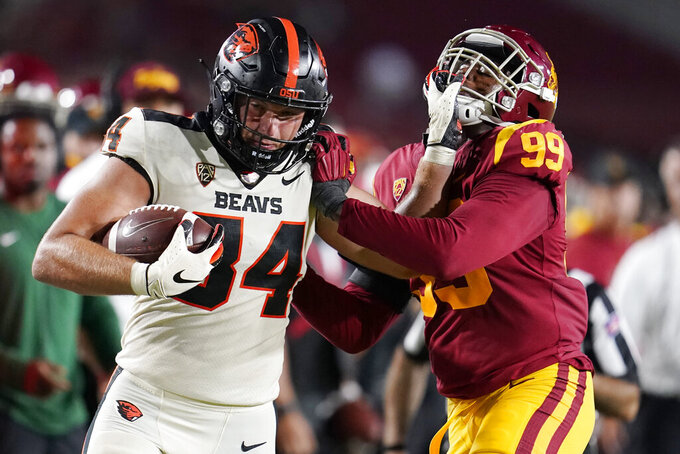 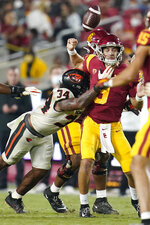 “I just love the feeling of getting a big team win. It doesn’t matter what I did, it matters what we all did, and I was just a small part of it,” Lindsey said. “The praise goes to the team. It’s a team effort, and I love the way we handled business here. It looked like a complete team to me.”

Kedon Slovis threw for 355 yards with one touchdown and three interceptions as the Trojans (2-2, 1-2) lost their second straight home game as double-digit favorites. It was the first home game for interim coach Donte Williams, who replaced Clay Helton two days after a 42-28 loss to Stanford on Sept. 11.

“Well, tonight just wasn’t our night,” Williams said. “Oregon State, tonight they outcoached us, they outplayed us, and it will all get fixed. I promise you that.”

Oregon State used a dominant run game and Nolan’s precise passing to methodically wear down USC, scoring touchdowns on five straight drives starting in the second quarter. That included consecutive 92-yard marches, the latter capped by Tre’Shaun Harrison’s 36-yard scoring grab with 44 seconds left in the first half that put the Beavers up for good.

Nolan was 15-of-19 passing for 213 yards, though he did throw his first two interceptions of the season, and added 57 yards rushing.

Inside linebacker Jack Colletto added two short scoring runs on direct snaps, and he picked off Slovis late in the fourth quarter.

With freshman quarterback Jaxson Dart unavailable because of a knee injury sustained after coming off the bench to lead the Trojans’ win at Washington State, Slovis started but was hampered by the same issues that cost him against the Cardinal, including dropped passes and inconsistent protection.

“This is not gonna turn around overnight,” Slovis said. “We’re trying to build something here, and Coach Donte has done a great job of starting to hold guys accountable and changing the culture and building the culture. You’re not gonna see it change in one week, and we have a lot of work to do, and the main thing, the message we’re kind of having is we got to stay together and stay up.”

Keaontay Ingram did offer some pop in the ground game for USC in the first half, but he became less of a factor as the game went on. He finished with with 79 yards rushing and two touchdowns.

Dart will be week to week after he underwent surgery to repair his meniscus, Williams said.

Oregon State: With the efficient Nolan leading the way and a solid defense starting to find itself, the Beavers have to feel like they can now be a factor in the jumbled Pac-12. At minimum, they are on track to reach a bowl game for the first time since the 2013 season ended with a victory in the Hawaii Bowl.

USC: It won’t be an easy fix for the Trojans’ next coach. Their issues with poor recruitment, inadequate player development and a lack of fundamentals were repeatedly exposed by Oregon State.

Oregon State: The Beavers host Washington on Saturday and will try to end a nine-game losing streak in the series.

USC: The Trojans have an early start at Colorado on Saturday, with kickoff set for the equivalent of 11 a.m. in Los Angeles.