Boise State, No. 22 SDSU meet with division titles at stake 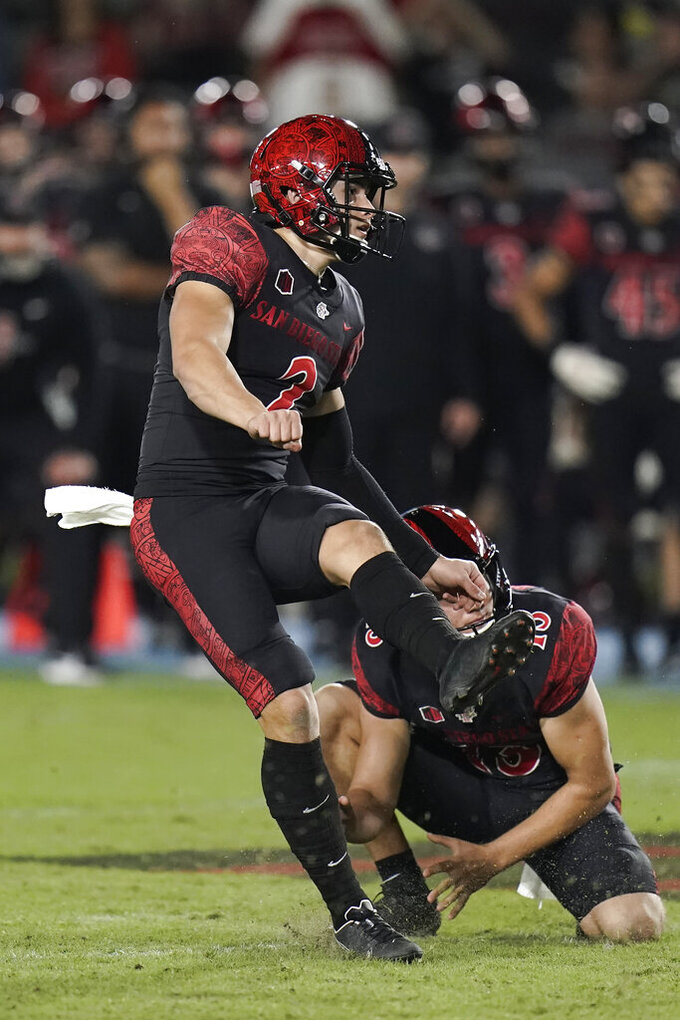 Line: Boise State by 2 ½, according to FanDuel Sportsbook.

This game has implications for the races in both the West and Mountain divisions. San Diego State has an easier road to the West title and a spot in the league championship game. It can clinch the title by beating the Broncos, or if Fresno State loses at San Jose State on Thursday. The Mountain Division is more complicated, with Air Force, Boise State and Utah State tied at 5-2. If the Aztecs win the West, they will host the title game Dec. 4 at their temporary home, Dignity Health Sports Park in Carson, a Los Angeles suburb.

San Diego State punter/placekicker Matt Araiza against BSU. The junior from San Diego remains the Aztecs’ most potent threat after repeatedly forcing opponents into bad field position. Araiza, a finalist for the Ray Guy Award, leads FBS in punt average at 51.9 yards and is on pace to break the FBS record. He has an NCAA-record 36 punts that have traveled at least 50 yards, an NCAA-record 17 punts that have gone 60 yards and 34 punts downed inside the 20-yard line.

This will be the last regular-season game for SDSU at the home of the Los Angeles Galaxy of the MLS. Aztec Stadium in San Diego is scheduled to open in time for the 2022 season. ... The Aztecs go from playing at 8:30 p.m. on a Friday night in Las Vegas to playing at 9 a.m. on Black Friday in Carson. ... SDSU has posted its fifth 10-win season in the last seven years. At 10-1, San Diego State has matched its best start since finishing 11-0 in 1969. ... The Aztecs are the only school in the Mountain West the Broncos don’t have a winning record against. The Broncos are 2-1 when playing the Aztecs on the road, and knocked off SDSU 31-14 on Oct. 14, 2017 in the only previous meeting in which the Aztecs were ranked.