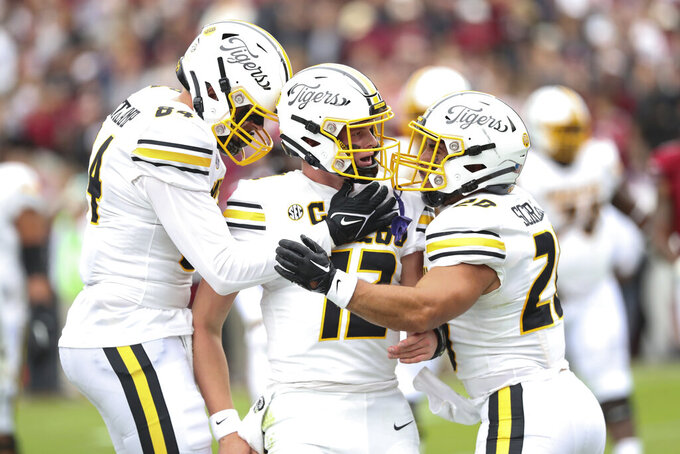 COLUMBIA, S.C. (AP) — Brady Cook didn't let Missouri's early struggles this season change his outlook on what the Tigers could accomplish. He made sure his teammates wouldn't let that happen, either.

Cook and the Tigers, who opened 0-3 in Southeastern Conference play, directed three long, first-half drives to built a 17-0 lead on the way to their 23-10 victory over No. 25 South Carolina on Saturday night.

“It was a tough three weeks,” Cook said of his team's SEC losses. But he made sure the Tigers knew how close they were to success.

“There's no reason to give up now,” Cook remembered.

“I showed and we showed what we can do,” Cook said.

It was a dominating performance over the Gamecocks, who came in with a four-game win streak and in the national rankings for the first time since early in the 2018 season.

Receiver Dominic Lovett had career highs with 10 catches for 148 yards while the Tigers' defense had 11 tackles behind the line of scrimmage and held the Gamecocks to 203 total yards.

It was hard for even the most optimistic among Tigers fans to see this coming. Missouri coach Eli Drinkwitz told his seniors earlier this season that just because the results aren't there, “that doesn't mean you haven't created positive change in the program.”

Drinkwitz hopes the positivity continues the final month of the season. It could if Cook keeps leading like this.

He completed 17 of 26 passes for 224 yards without an interception. He added 53 yards and a touchdown on the ground. as Cook's steady hand kept driving Missouri forward.

Cook led a 15-play, 96-yard scoring drive that took up most of the first quarter and which he ended with his 3-yard burst to the end zone.

The Tigers went on another lengthy drive on their next possession, this one going 84 yards in 10 plays and finishing with Cody Schrader's 1-yard run.

When Harrison Mevis hit a 19-yard field goal, Missouri was up 17-0 late in the first half.

The Gamecocks could not dig themselves out of that hole and finished with their fewest points since losing to No. 1 Georgia 48-7 on Sept. 17.

“Every single week you have to be at your best, and we weren’t at our best as coaches or as players,” Gamecocks coach Shane Beamer said.

Rattler passed for just 146 yards with an interception and a fumble deep in Tigers' territory. Tailback MarShawn Lloyd, who ran for 451 yards and seven TDs as South Carolina won its past four, had just 30 yards on seven attempts.

Beamer said Lloyd has a “pretty significant” bruise on his leg. Lloyd couldn't return in the second half.

Mevis added field goals of 50 and 32 yards for Missouri in the second half.

Missouri: The Tigers moved the ball consistently on offense and were dominant on defense to totally take apart South Carolina. If Missouri can keep Cook protected and continue its defensive success on third downs (the Gamecocks converted just 5 of 13 chances), it will be in every game down the stretch.

South Carolina: All the good things the Gamecocks had gained on offense and defense during their four-game winning streak went up in smoke against Missouri. They'll have to get right in a hurry to reach a bowl game. After a trip to Vanderbilt, they finish with an Orange Crush of Florida, No. 3 Tennessee and No. 5 Clemson.

Missouri won the Mayor's Cup that's contested between the two SEC East teams whose campuses are located in Columbia of their respective states. Missouri gets to keep the Cup for a fourth straight year. “It's a trophy game,” cornerback Ennis Rakestraw Jr. said. “We wanted to take something with us.”

Beamer has continually heard from supporters bothered by what they see as ineffective play-calling at times in the team's defeats. Beamer said the issues are collectively as a team, not any individual. “I understand their frustrations. We flat out laid an egg tonight,” he said.

Missouri returns home to play No. 19 Kentucky on Saturday.