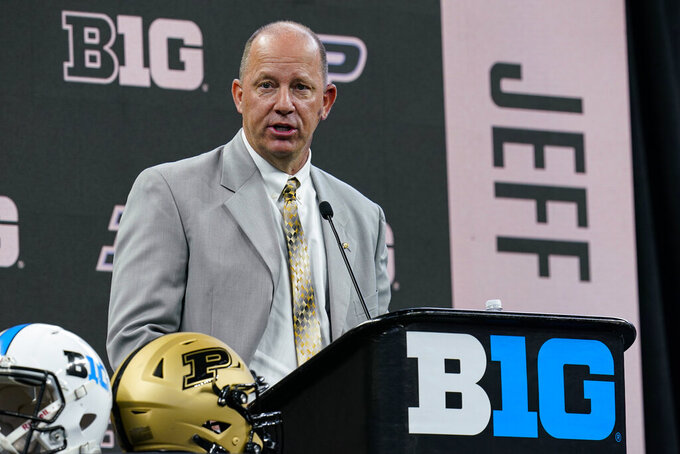 FILE - Purdue head coach Jeff Brohm talks to reporters during an NCAA college football news conference at the Big Ten Conference media days in Indianapolis, in this Friday, July 23, 2021, file photo. Brohm named Jack Plummer the starting quarterback late last week, partially because of his mobility. But Brohm also made it clear he's still willing to make a change -- if he doesn't get the kind of play he expects. (AP Photo/Michael Conroy, File)

Purdue coach Jeff Brohm revised his philosophy during the offseason.

He wanted the Boilermakers to play tougher, find more balance and become more aggressive on offense and defense. On Saturday night against Oregon State, starting quarterback Jack Plummer will help the Boilermakers unveil their new look in the season opener for both teams.

“You put in all this work all year long, you dedicate a lot of your life to finding ways to improve and get better and win football games," Brohm said Monday. “There’s no reason not to go out there and be excited, lay it all on the line, cut it loose each and every week, play free, want to make plays, want to be aggressive, want to go for the win."

After going 4-8 in 2019 and missing the postseason for the first time as a head coach, Brohm shuffled his coaching staff. Not much changed. Purdue won its first two games with Aidan O'Connell behind center, then lost its final four — all after O'Connell got hurt.

Plummer, who relieved the injured Elijah Sindelar in 2019 before suffering a season-ending injury, started the final three games.

With 230-pound running back Zander Horvath keeping the ground game on track and all-conference receiver David Bell making big plays down the field, Brohm thinks he may finally have the combination he needs.

“On offense we always want to be aggressive, but we do want to have some balance, and we do want to be physical in our approach," he said. “Taking care of the football, being efficient, avoiding negative plays, creating a few big plays throughout the course of getting chunks of positive yardage will be important."

And Brohm won't be shy about making changes if things don't work out.

The more notable changes will be evident on defense.

Brohm spent more time game-planning with his staff, looking for ways to crank up the pressure on opposing quarterbacks and presumably forcing more takeaways. Getting all-conference defensive end George Karlaftis back should help.

So far, though, Brohm has liked what he's seen on the practice field. Now he just wants to see the results on Saturdays this fall.

“I hope it makes us look better," he said. “Our defense, other than one scrimmage where we weren’t up to par, has done a really good job, and we’ve guarded things tighter. But I anticipate them playing well, and I think they’ve gained some confidence throughout spring and summer and fall camp, and now they’ve got to carry it over to the game."