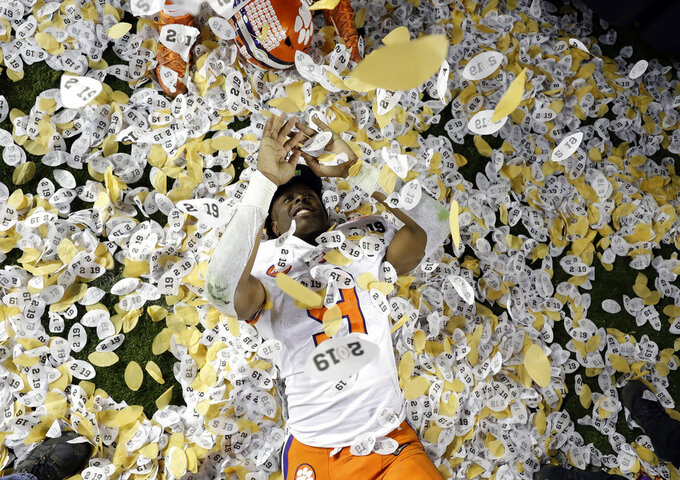 SAN JOSE, Calif. (AP) — Clemson's blowout victory over Alabama in the College Football Playoff drew a 14.6 overnight rating for ESPN across its multiple-channel broadcast, the lowest-rated title game in the 5-year-old postseason system.

The viewership numbers reported Tuesday by Nielsen provided some better news for the network. ESPN said Nielsen reported that 25.2 million viewers tuned into Monday night's game on ESPN, ESPN2 and ESPNU. The figures do not yet include ESPNEWS or streaming viewership. The 2016 national championship game between Alabama and Clemson that was decided on a last-second touchdown drew 25.3 million viewers.

The third championship meeting of the Tigers and Crimson Tide, and fourth straight playoff meeting overall, was also the most lopsided CFP final. The ratings and viewership topped out at 16.2 and 27.8 million in the first half when the Tigers extended their lead to 15 points.

Clemson won 44-16, the largest margin of victory in a college football championship game since Alabama beat Notre Dame by 28 in the 2012 BCS title game.

The College Football Playoff pivoted away from its original plan to play semifinal games on New Year's Eve, moving several sets of games off weeknights to Saturdays instead.