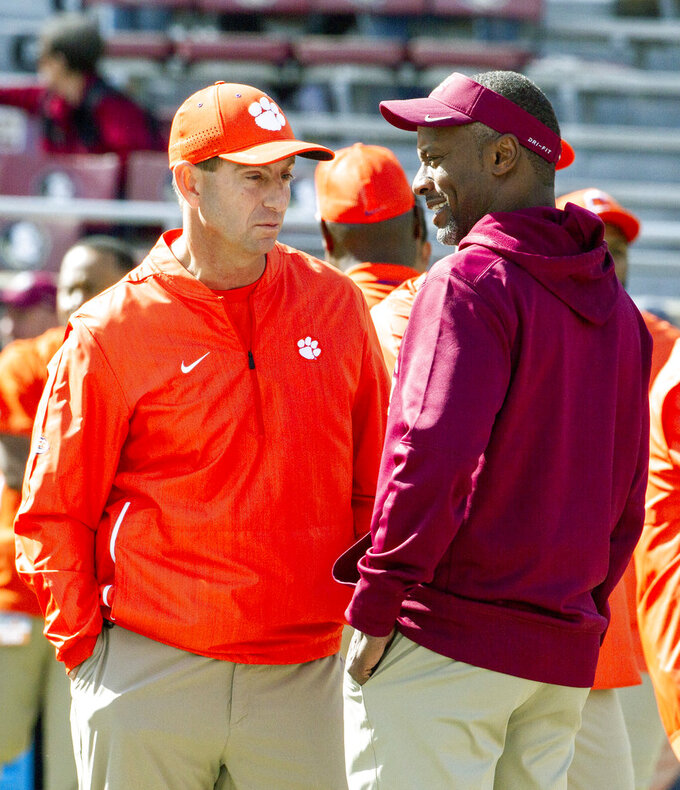 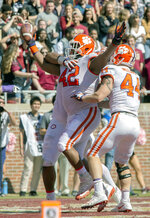 TALLAHASSEE, Fla. (AP) — No Atlantic Coast Conference team had ever knocked off Florida State for four straight years. Clemson spent the week making sure it would be the first.

"This was an awesome accomplishment for our seniors," coach Dabo Swinney said. "This was something they really wanted to do ... be that first ACC senior class to go 4-0 on these guys."

Florida State routed Clemson 51-14 in 2013, a victory that was part of the Seminoles' undefeated run to the national title. But since then, the Tigers have been the class of the ACC — and owned their rivalry with Florida State.

"I'm definitely honored," defensive tackle Christian Wilkins said. "Just speaks volumes of our program and the special guys we have, the special group of seniors we have."

Lawrence completed 20 of 37 passes for 314 yards before staying on the sideline for good late in the third quarter. Amari Rodgers had six catches for 156 yards and two touchdowns, and Tee Higgins also had two TD receptions.

The Tigers moved to 8-0 for the seventh time in school history, including the third time in the last four seasons. Clemson also recorded back-to-back wins in Tallahassee for the first time.

Florida State (4-4, 2-4) couldn't get out of its own way, suffering its most-lopsided defeat at home — surpassing a 58-14 loss to Southern Miss in 1981. It was also the most points allowed by the Seminoles at Doak Campbell Stadium.

"I felt like we had some guys that quit on our football team and that's can't be tolerated," Florida State coach Willie Taggart said. "You quit, you don't play."

Defensive end Brian Burns, who had a tackle and a quarterback hurry, agreed with Taggart's assessment.

Florida State had not allowed 30 points in 11 straight games, dating to the 2017 loss at Clemson. But that streak was snapped less than a minute into the third when Lawrence connected with Rodgers on a 58-yard catch and run.

Deondre Francois completed 17 of 36 passes for 180 yards and an interception for the Seminoles before departing due to injury. James Blackman came in and had a 73-yard touchdown pass to Keyshawn Helton.

"Our defense set the tempo for the day right out of the gate," Swinney said.

A MAN OF MANY TALENTS

Clemson defensive tackle Christian Wilkins has wreaked havoc on quarterbacks in his career. He can play a little on the offensive side, too.

Swinney said Wilkins scored from the "Fridge Package," a jumbo I-formation that was named after former Clemson defensive lineman William "Refrigerator" Perry (who scored a touchdown for the Chicago Bears in Super Bowl XX). Wilkins lined up behind defensive tackle Dexter Lawrence and plunged across the goal line.

"The guys did a great job with just clearing it open for me, whether it was the o-line or Dex," Wilkins said. "I really didn't have to do much. But I had to dive for style points, just to make it fun out there and show my athleticism a little bit."

Florida State came into the game with 25 sacks, ranking 8th in the FBS. But Clemson held the Seminoles without a sack on 44 pass attempts (Lawrence dropped back 37 times, and Chase Brice threw seven times).

"They've been playing their butts off the whole season," Lawrence said of the offensive line. "We're growing together. Getting closer."

Florida State lost three players to ejections. Safety Hamsah Nasirildeen was ejected for targeting in the first half. Wide receiver Nyqwan Murray and linebacker Zaquandre White were tossed for separate incidents where they punched Clemson players in the second half.

Clemson: The Tigers have cruised the last three weeks by a combined 163-20.

Florida State: Florida State is 0-5 against ranked teams since the start of the 2017 season. Four of those losses are by double digits, including a 31-14 loss at Clemson last fall.

Florida State: Visits No. 22 North Carolina State on Saturday, the second of three straight ranked opponents on the schedule. Florida State also plays at No. 3 Notre Dame on Nov. 10.