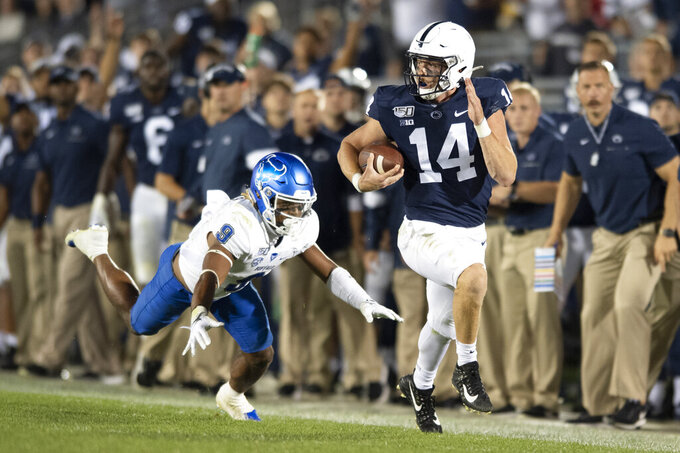 Clifford threw for 280 yards and four touchdowns and ran 11 times for 51 to lead the No. 15 Nittany Lions back from a halftime deficit to beat Buffalo 45-13 on Saturday night.

Clifford, the Lions' first-year starter, opened the scoring with a 28-yard pass to Jahan Dotson on Penn State's second drive. He tossed a pair of TDs to tight end Pat Freiermuth in the third quarter after cornerback John Reid's 37-yard interception return put Penn State up for good.

Noah Cain added a 2-yard TD run to give Penn State's a 35-13 lead heading into the fourth.

"We weren't executing in the first half," Clifford said. "I take the blame for that. We pulled together and talked through some things and got it going in the second."

The Nittany Lions (2-0) trailed 10-7 at half after the Bulls (1-1) had dominated time of possession to that point.

Quarterback Matt Myers hooked up with tight end Julien Bourassa for a 5-yard score late in the second quarter. Alex McNulty kicked a pair of field goals for the Bulls.

"They played really hard, competed really well for the first 30 minutes," Buffalo coach Lance Leipold said. "Came out in the second half and, obviously, a big switch in momentum."

It was the second straight game with an interception for Reid who's just over two years removed from a serious knee injury that cost him all of 2017.

"It was huge," Clifford said. "For us, on offense, we feed off that energy. The crowd gets back into it."

Freiermuth, arguably Penn State's most dangerous red zone target, finished with eight catches for 99 yards a week after he was knocked out of the game against Idaho with an apparent head injury.

Freiermuth, who led the team with eight touchdown catches last year, missed some practice time this week to heal up.

Buffalo punter Evan Finegan was carted off after suffering what appeared to be a serious right leg injury following a partially blocked punt in the third quarter. Reserve quarterback Kyle Vantrease handled punting duties the rest of the way.

Buffalo: The daunting environment didn't seem to bother the young Bulls. They controlled the pace in the first half, running 46 plays for 27 yards to Penn State's 20 plays and 82 yards.

Penn State: The Nittany Lions' strength is their defensive line and Buffalo's offensive front did a good job neutralizing Yetur Gross-Matos and his teammates for most of the first half. In the meantime, Clifford and his receivers were able to create some chemistry.

Penn State cleaned up its mistakes at halftime, won going away and shouldn't be penalized for its slow start.