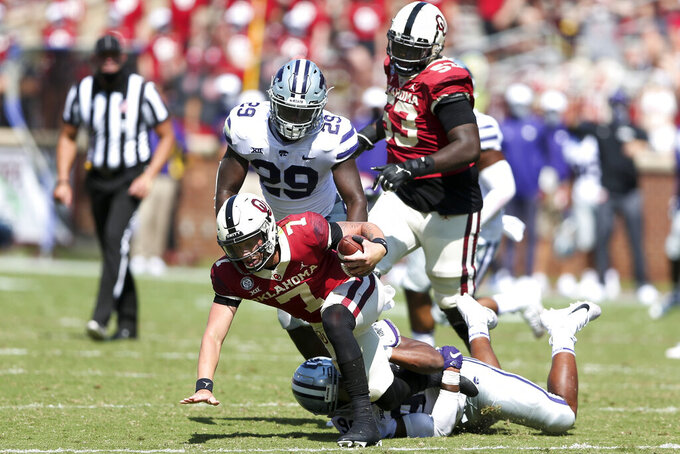 In recent years, the Big 12 has been at once completely stable and highly volatile.

Oklahoma has won five straight conference championships, losing one game in league play along the way the last four seasons, always as a substantial favorite.

The rest of the conference has been a choose-your-own-adventure ride, with five different schools finishing second to the Sooners each of the last four years. Oklahoma State and West Virginia tied for second in 2016.

A week after the Big 12 was a few competent minutes by Texas Tech from having both of its traditional heavy-weights beaten on the first day of conference play, No. 9 Texas and No. 18 Oklahoma again face potentially challenging games.

The Longhorns welcome TCU, which has owned Texas since UT's former athletic director, DeLoss Dodds, played a pivotal role in the Horned Frogs joining the Big 12 in 2012.

TCU coach Gary Patterson is 6-2 against three Texas coaches in Big 12 play. That's no way to repay a favor.

In fact, it could be argued no rivalry best represents the Longhorns' recent struggle to be more than just another Big 12 contender than their series with the Frogs.

From 1968 until the Southwest Conference dissolved after the 1995 season, TCU beat Texas once. TCU becoming a yearly series again was not supposed to represent a threat to Texas, but not only have the Frogs won two-third of the games but they have often done so in resounding fashion.

Oklahoma will try to bounce back from its second-half collapse against Kansas State against Iowa State in Ames. Traditionally, this has been a reliable get-right game for the Sooners. Oklahoma has lost just twice to Iowa State since 1962.

Coach Matt Campbell's arrival at Iowa State, however, has turned the 'Clones into a tough out: OU has won three of the last four, but none by more than 10 points.

Could be another interesting Saturday for the Red River Rivals, who play each other next.

Cougars QB Zach Wilson has completed all of his third-down passes in two games. All five of them. ... BYU 38-21.

Cavaliers have avoided the Tigers through much of Clemson's run of five straight ACC titles — except last year's 62-17 conference championship blowout ... CLEMSON 42-10.

Nick Saban is 19-0 against his former assistants, including 3-0 against Aggies coach Jimbo Fisher ... ALABAMA 35-20.

Longhorns tilt series with the Frogs back their way ... TEXAS 34-21.

No. 12 North Carolina (minus 14) at Boston College

Tigers go from Air Raid to a Vandy offense that has gone eight straight games without breaking 200 yards passing ... LSU 38-14.

Vols have won seven straight, best streak since 11 in a row spanning 2015 and ‘16. We’ll see if this ends better for coach Jeremy Pruitt than it did for Butch Jones ... TENNESSEE 27-20.

North Carolina State (plus 14) at No. 24 Pittsburgh

First game for the Falcons who are expected to play with a depleted roster ... NAVY 28-14.

Baylor (minus 3) at West Virginia — @ArtWMoore