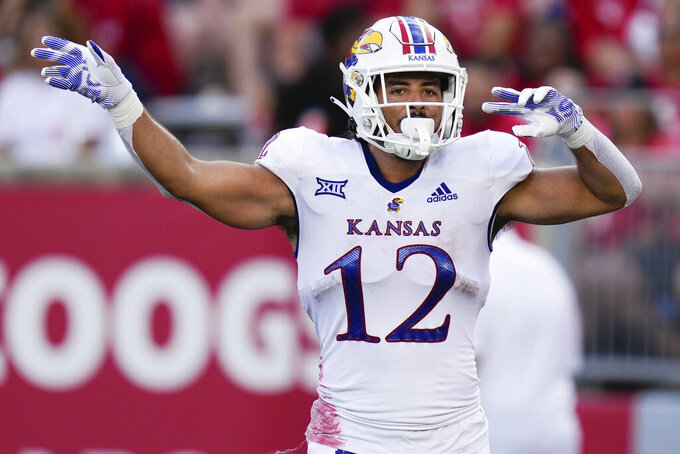 Kansas running back Torry Locklin celebrates after his touchdown during the first half of an NCAA college football game against Houston, Saturday, Sept. 17, 2022, in Houston. (AP Photo/Eric Christian Smith)

After three weeks, there are 33 unbeaten teams left in major college football and eight of them are playing against each other Saturday.

There is a Pac-12 showdown, with No. 7 Southern California visiting Oregon State.

In the Big Ten, Maryland should provide No. 4 Michigan its first real competition of the season.

No. 5 Clemson and No. 21 Wake Forest square off in a key ACC Atlantic Division game.

And then there is Duke at Kansas in the most unlikely matchup of 3-0 teams. The basketball powerhouses combined to go 5-19 with one conference victory between them last season.

The winner Saturday will be two-thirds of the way to bowl eligibility. It is a fascinating matchup and one of the five most intriguing games of the weekend:

Can Arkansas' shaky pass defense, which ranks last in the Southeastern Conference in yards allowed per game (353) and per pass (8.5), be the tonic for an Aggies offense that has had a hard time staying on the field? Texas A&M had won nine straight, though mostly close games, in the series before the Razorbacks snapped the slide last season.

Kansas State at No. 6 Oklahoma

This was lining up to be a bigger game until the Wildcats were upset at home by Tulane last week. Still, the Sooners have hardly been tested under coach Brent Venables and K-State has been a problem for OU recently. Four of the last five meetings have been decided by seven points of fewer, with two Kansas State victories.

Wake Forest won the ACC Coastal last season, but still couldn't handle Clemson in what was a down year for the Tigers. It was the Demon Deacons' 13th straight loss in the series — the last four by an average of 38 points. Clemson has eased into its 3-0 start. Can Wake provide better insight into the Tigers' ceiling?

No. 7 Southern California at Oregon State

The Trojans have been landing on this list a lot as we try to get a handle on just how good Lincoln Riley's portal all-stars can be. The Beavers are built to exploit USC's issues up front on defense, but can they keep up with QB Caleb WIlliams, WR Jordan Addison and a Trojans offense averaging 7.96 yards per play (fourth in the nation)?

Jayhawks coach Lance Leipold looks like a miracle worker in his second year leading a program that has not won more than three games in a season since 2009. Kansas is the third-highest scoring team in the country at 53 points per game. Duke has already matched last season's win total under first-year coach Mike Elko. Can a football game fit in Phog Allen Fieldhouse?

The rest of the ranked teams facing FBS opponents with odds from FanDuel Sportsbook.

Golden Flashes' brutal September slate that has already taken them to Washington and Oklahoma arrives at the top of the mountain ... GEORGIA 56-7.

Buckeyes have won eight straight meetings overall and the Badgers have not won in Columbus since 2004 ... OHIO STATE 38-21.

Terps beat Michigan in their first Big Ten season, but have lost six straight since by an average of 34 points ... MICHIGAN 48-14, BEST BET.

Wildcats are one of two teams, along with Alabama, that have not given up a touchdown pass ... KENTUCKY 38-10.

Freshman RB Nick Singleton is averaging 11.1 yards per carry for the Nittany Lions, best in the nation ... PENN STATE 45-14.

Rebels are one of three teams, along with Georgia and Iowa, that have permitted only one touchdown ... OLE MISS 38-14

Bears-Cyclones has become an interesting Big 12 rivalry; last six game have been split by an average margin of six points ... IOWA STATE 24-23.

Ex-Mountain West and WAC rivals have not met in the regular season since the Cougars went independent in 2011 ... BYU 34-10.

Last three meetings in Lubbock have been wild, one-score games with an average of 92 total points ... TEXAS TECH 34-30, UPSET SPECIAL.

Slow start for Hurricanes QB Tyler Van Dyke, who ranks 71st in the country in efficiency rating with only three TD passes ... MIAMI 45-14.

Notre Dame (plus 1 1/2) at North Carolina (@MarkWasik): Irish offense has been bogged down, but tackling hasn't been the Tar Heels' strong suit ... NOTRE DAME 31-27.

Iowa at Rutgers (plus 7 1/2) (@DohnGreg): Punting fans, this game's for you: Australians Tory Taylor of Iowa and Adam Korsak of Rutgers are two of the best and figure to be busy ... IOWA 17-13.

Marshall (minus 3 1/2) at Troy (@DarianShoemaker): Thundering Herd went from winning at Notre Dame to losing to Bowling Green ... MARSHALL 27-21.