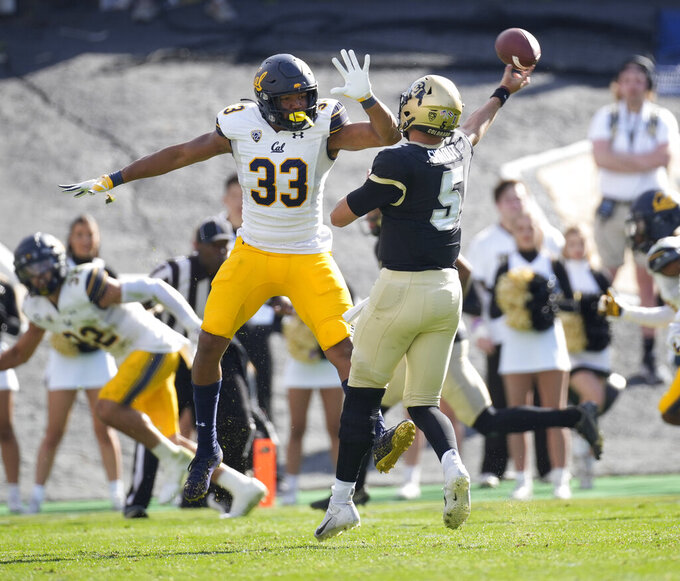 BOULDER, Colo. (AP) — Longtime NFL linebacker Chad Brown owes so much to the University of Colorado, his alma mater. He won a national title while with the Buffaloes. He met his wife there. He sent his kids to school in Boulder, too.

That’s why going back these days brings such an array of emotions.

Brown so deeply wants to see the Buffs return to the glory of ages ago, when bowl games were just a matter of which one, not just hoping for a berth. But he also realizes it's an Everest sort of ascension out of a rocky slide that's seen the program tumble to 1-6 this season (all losses by 23 or more points) and cost coach Karl Dorrell his job earlier this month.

The Buffaloes, who are 1-3 in the Pac-12, have free-fallen to near the bottom of the college football landscape, with CBS Sports ranking them as the lowest Power Five school (120th overall) this week.

“I look at life through black-and-gold glasses,” said Brown, who helped the Buffaloes win their only national football title during his sophomore season in 1990 before the Pittsburgh Steelers drafted him in the second round of the 1993 NFL draft. “But if you can’t recognize and see the lay of the land, and the difficulty ahead for the Buffs, you’re fooling yourself.

For their recent fall from grace, there’s a myriad of reasons. Partly, the transfer portal (Colorado lost a chunk of players before this season). Partly, the money surrounding name, image and likeness deals (complicated by state policies). But perhaps more than anything, a not-so-clear understanding of precisely what's necessary to win in Boulder.

At least, that’s the take of former Colorado coach Gary Barnett, who’s now a radio analyst with KOA in Denver. Since Barnett's departure — he went 49-38 from 1999-05 — the Buffaloes have had nine coaches, including three interims (with Mike Sanford currently in charge). They'll have to win the rest of their games — as underdogs, no less — to avoid a fifth losing season in six years.

“It’s more complicated, probably at Colorado, because the appearance from the outside is one thing. But once you get here, and realize that it has its own set of values, its own set of things that are important, and if it didn’t fit with what you thought it was going to be, it’s easy to get resentful or to feel like nobody’s helping you,” explained Barnett, who was a longtime assistant coach in Boulder before taking over at Northwestern and then returning to Colorado. “Fortunately, in my case, I’d been here. I knew what to expect.

“You’ve got to have the right attitude going in.”

Sanford has a shot, too, should he be able to right the reeling Buffaloes. He's 1-1 since taking over for Dorrell.

Sanford pointed to what Oregon State has done as an ideal blueprint. The Beavers went 2-10 in their first season under coach Jonathan Smith in 2018. But after beating the Buffaloes 42-9 last weekend they became bowl eligible for a second straight season.

“A lot of those players that were playing against us on Saturday are guys that had gone through those tough years,” Sanford said. “They had the continuity — how they were developed, the strength coach, the position coaches, all the way down. You see them grow up and become a veteran team that looked like a true Power Five, upper-echelon-of-the-conference type of team.”

Following this season, the Buffaloes could experience another exodus via the transfer portal, with players chasing a more stable environment, maybe even an easier course load. Or more lucrative NIL deals, which is a realm the Buffaloes are looking to be more competitive.

“I do not think it is a matter of altering any of the rules and policies,” University of Colorado Chancellor Philip P. DiStefano said when Dorrell was fired on Oct. 2. “I believe that you can have excellent academics and excellent student-athletes coming together. They are not mutually exclusive.”

Back in his day, Brown was a standout player in California who happened to see some big names in his state being heavily recruited by Colorado. That included Bieniemy and later quarterback Darian Hagan. It enticed Brown to Boulder as the Buffs were rising in prominence after going 1-10 under Hall of Fame coach Bill McCartney in 1984.

There was a game plan in place. The 1990 season culminated with Colorado earning a national title following its win in the Orange Bowl over Notre Dame.

Bottom line: The next coach needs time to grow the program.

“If you get the right coach and he’s able to build his program, you can get back to respectability, and maybe even some years be a part of the bigger national picture,” said Brown, a sports talk show host on 104.3 The Fan in Denver. "That’s my hope.”