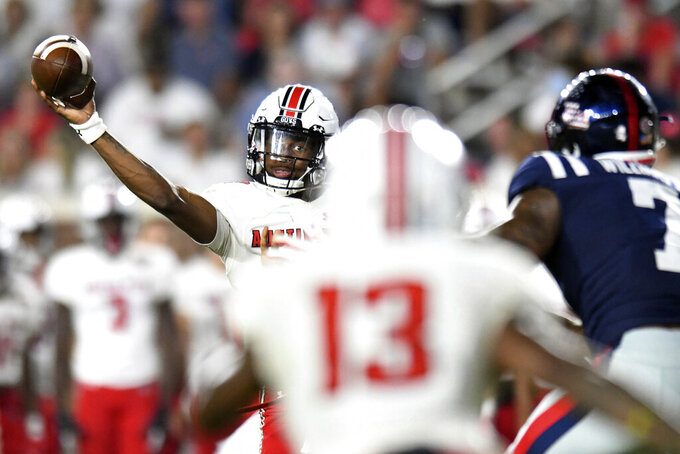 OXFORD, Miss. (AP) — Mississippi quarterback Matt Corral insists he does not play favorites when it comes to picking receivers.

“I really don’t. I go through my progressions and make my reads,” Corral said after throwing for five touchdowns – four in the first half – as No. 20 Mississippi routed FCS member Austin Peay 54-17 on Saturday night. “There’s really not a favorite. We’ve got receivers that can make plays ... It’s hard for the defense to figure out who to take away.”

Ole Miss (2-0) added a defensive touchdown on a strip sack and 33-yard fumble return from defensive end Sam Williams and a safety from the special teams to build a 37-0 second quarter lead over the Governors (1-1) of the Ohio Valley Conference.

“We were coming off a short week with the Monday win with Louisville,” Ole Miss coach Lane Kiffin said. “For one full day of practice and coming off a physical game, I thought our starters played pretty good.”

Corral finished 21 of 33 for 281 yards and had two other potential touchdown passes dropped during a lopsided first half. Corral guided two series in the third quarter, building a 51-10 lead on a 3-yard run by Snoop Conner, before yielding to three reserves in the final 25 minutes.

“The fast start was important,” Corral said. “It’s a lot of little things that if you do them right, they compound into big things, like touchdowns. We’ve still got some things to clean up but we got the job done.”

The Rebels finished with 631 yards of total offense.

“I had a lot of fun out there,” Drummond said. “Matt and I have been clicking in practice, but all the receivers feel comfortable with Matt throwing the ball.”

Draylen Ellis was 22 of 41 for yards for Austin Peay, including a 30-yard touchdown to Baniko Harley. The Governors had 374 yards to total offense and added a 30-yard field goal from Maddux Trujillo and a 40-yard scoring run by CJ Evans Jr. in the second half.

“I didn’t see any fear in our players and I’m really proud how we competed,” Austin Peay coach Scotty Walden said. “Ole Miss is a Top 25 team for a reason. We had over 400 (374) yards, sustained drives, but we’ve just got to cap it off with points. It’s all about the points.”

With the Rebels holding an early 7-0 lead, defensive end Sam Williams turned a highlight play that provided decisive. Looping the Austin Peay offensive line from the right end slot, Williams tracked a scrambling Ellis as he turned up field to throw and stripped the ball. Without breaking stride, Williams scooped the fumble from a favorable bounce, turned and ran with escorts to complete the 33-yard touchdown play.

“I was just doing my job. We are coached in that situation to see ball, get ball,” said Williams, who finished with two sacks and two tackles for loss. “I told my teammates before the game that I felt like I was going to score tonight. I’m not sure how I feel, but I know I scored.”

Austin Peay: The Governors, ranked No. 17 and No. 18, respectively, in two Top 25 FCS polls, looked like an Ohio Valley Conference championship contender for the opening 20 minutes before the Rebels decisively pulled away. Defensive back Kordell Jackson had two sacks in the first half.

Ole Miss: This was exactly what was expected against an FCS opponent. The Rebels scored on offense, defense and special teams. The only concern in an otherwise dominating performance was nine first half penalties.

“I’m concerned about that,” said Kiffin, as the Rebels finished with 12 penalties for 130 yards. “That will get you beat against the better teams.”

Ole Miss will remain in the poll, though a major advance seems unlikely. But the lopsided win did nothing to hurt the Rebels, one of six SEC teams in the Top 25.

Austin Peay: The Governors host Morehead State on Saturday in their home opener.

Ole Miss: The Rebels host Tulane on Saturday to wrap up a two-game home stand.