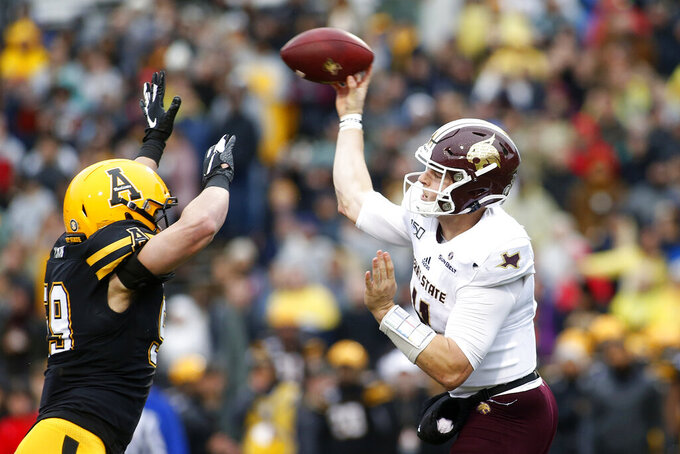 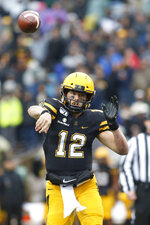 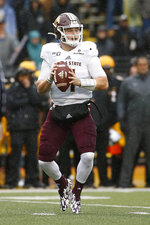 He’s carved out a pretty solid niche at tailback.

Evans ran for 154 yards and three second-half touchdowns and No. 23 Appalachian State avoided another home upset with a big second half to beat Texas State 35-13 on a rain-soaked Saturday.

The victory, combined with Arkansas State’s 38-33 win over Georgia Southern, guarantees the Mountaineers (10-1, 6-1 Sun Belt) a spot in the Sun Belt Conference championship game on Dec. 7 for the second straight season.

Evans has eclipsed 1,150 yards rushing in each of the past two seasons and needs 14 yards to break into the top 10 in school history in rushing.

Coach Eli Drinkwitz is glad the previous coaching staff made that move.

“He's an elite tailback, obviously,” Drinkwitz said. “To me, he's one of the most dynamic players in college football because of his speed and return ability, and we're very fortunate to have him. I've been blessed to be around some really good running backs. Five of them have been drafted, and he's right there with all of them, for sure.”

Evans said he isn’t surprised by his success because he played running back in high school.

“At times I had other people who could play running back, so I would move to slot,” said Evans, who was moved to tailback in 2016 after the Mountaineers sustained some injuries at that position.

Quarterback Zac Thomas threw for 174 yards and two touchdowns to help the Mountaineers improve to 30-6 at home since becoming an FBS team in 2014.

Texas State entered the game as a 30 1/2-point underdog, but trailed only 14-13 midway through the third quarter, and most fans at Kidd Brewer Stadium were probably thinking about Georgia Southern’s 24-21 upset over then-20th-ranked App State three weeks ago on this same field.

But linebacker Noel Cook turned the momentum when he intercepted a tipped pass in Texas State territory, setting up a 13-yard TD run around right end by Evans. Evans would add touchdown runs of 10 and 13 yards to give 14 TDs on the season.

“That was huge momentum boost for our team and then we were able to finish them off,” Drinkwitz said.

“App State is by far the most talented team in the league,” Texas State coach Jake Spavital said. “We can't afford to have penalties, have turnovers, and shoot us in the foot against a quality opponent like that.”

Thomas got the Mountaineers going early, connecting on a 45-yard TD strike down the middle to wide receiver Corey Sutton, who got a step on three defenders and stretched out to make an over-the-shoulder catch in the end zone. But Sutton, the team’s leader in yards receiving and TDs receiving, left the game with a knee injury after fumbling in the second quarter and it seemed to take the Mountaineers a while to adjust.

POLL IMPLICATIONS: A close win over Texas State isn’t exactly going to impress the voters, but the Mountaineers still could potentially move up in the polls. Appalachian State was previously ranked No. 20 this season, its highest ranking ever.

Texas State: This was a solid showing for the Bobcats for the first 2 1/2 quarters, particularly on defense against a Mountaineers team that came in ranked 21st in the country in scoring offense. But a penalty for illegal hands to the face nullified a third down stop, giving Appalachian State new life on offense.

Appalachian State: The injury could be problematic moving forward for the Mountaineers. Sutton was on the sideline in crutches after the game. Drinkwitz wouldn’t say what the injury is but called it “devastating” to the Mountaineers.

With Sutton injured the Mountaineers will have to rely more on Western Michigan graduate transfer Keishawn Watson, who had a 19-yard touchdown reception. Watson expected to have a larger role at Appalachian State but has had to wait his turn.

But he got his first TD for the Mountaineers on Saturday, which Drinkwitz said was fitting.

Drinkwitz said he can’t say enough positives about Watson and the way he trains. “For him to get a touchdown on senior day was just so appropriate,” Drinkwtiz said. “Football knows, the game knows. The game knew it was time to reward him and I’m fired up for him.”

Texas State: Wraps up the season next Saturday at Coastal Carolina.

Appalachian State: Will host the Sun Belt Conference championship game with a win at Troy on Friday night.