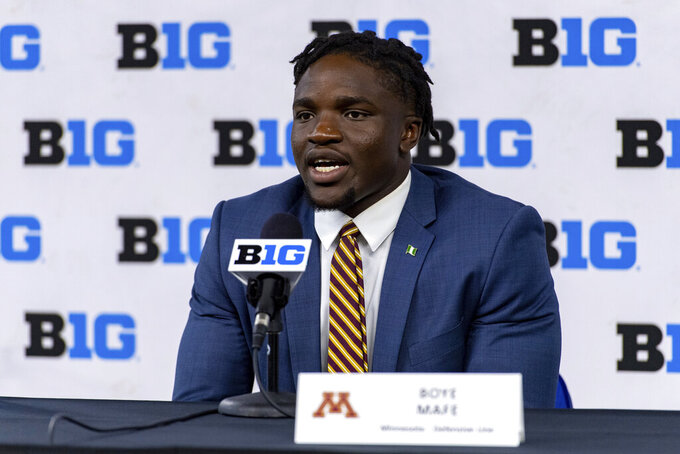 This year, Fleck has one of the oldest teams.

The Gophers have a bounty of experience returning, due to the NCAA's decision not to count the pandemic-altered 2020 season against anyone's eligibility limit. There's a feeling of unfinished business, too, after the virus-related limitations and on-field struggles last year. They're aiming anew to build off the 11-2 season they enjoyed in 2019.

“You want to leave things better than it came in as," running back Mo Ibrahim said. "I felt like that was a big deal for me. It’s just something that I wanted to do.”

Ibrahim is in his fifth year. Quarterback Tanner Morgan is in his fourth. The entire offensive line is back, led by Conner Olson (sixth), Sam Schlueter (sixth), Blaise Andries (fifth) and John Michael Schmitz (fifth). Daniel Faalele, the 6-foot-9, 380-pound tackle from Australia who opted out of the 2020 season, has returned for a fourth year.

Defensive tackle Micah Dew-Treadway, who played his first four seasons at Notre Dame, can top them all with his seventh year playing college football. Cornerback Coney Durr (sixth), defensive ends Boye Mafe (fifth) and Thomas Rush (fourth) and linebacker Mariano Sori-Marin (fourth) round out the rest of the leaders on defense.

“It's a fun team to coach. This team's been through a lot, and they stuck together through that,” said Fleck, who is 26-19 at Minnesota.

The confidence, depth and wisdom of an upperclassman-heavy group ought to give the Gophers as good of a chance as they'd ever have to beat powerhouse Ohio State. The national runner-up Buckeyes are the foe for the Thursday night season opener on Sept. 2.

“That’s what you want, to play the best of the best, and that’s certainly them," Morgan said. "That’s what we’re excited for.”

Offensive coordinator Mike Sanford Jr., entering his second season in the role, also has a goal of getting the ball to Ibrahim more through the air this year. Ibrahim has only 15 career receptions.

“He’s a special running back, but he’s even more than that,” Morgan said. “He’s got great hands, and he can run routes at a high level. He’s definitely more unique than a lot of people have seen.”

Defending the run has been a persistent weakness for the Gophers over the course of Fleck's tenure, but they're better positioned this year with far more depth on the defensive line. Mafe, Rush and Esezi Otomewo (fifth year) are the stalwarts on the outside. Dew-Treadway has been joined on the inside by graduate transfers Nyles Pinckney (Clemson) and Val Martin (North Carolina State).

“If you win up front, you’re going to win a lot of games," Fleck said.

The departure of Baltimore Ravens first-round draft pick Rashod Bateman to the NFL has left the biggest void, with Chris Autman-Bell the leading returner at wide receiver.

Autman-Bell suffered a leg injury during practice on Aug. 12, making his status unclear. Daniel Jackson is atop the list of candidates to step forward as he starts his second year. Autman-Bell said Jackson's release off the line of scrimmage reminds him of former Gophers star Tyler Johnson.

“He’s gotten way better than what you guys have seen,” Autman-Bell said.

MOMENTUM IN THE MIDDLE?

Opening against Ohio State has the potential to benefit the Gophers, with a schedule giving them a viable opportunity to spruce up their record before a daunting finish. The Gophers host Miami of Ohio, Bowling Green, Nebraska, Maryland and Illinois at the newly renamed Huntington Bank Stadium, with visits to Colorado, Purdue and Northwestern sprinkled in between.

Fleck has long dismissed the concept of momentum, but built-up confidence would be a welcome ally for the last three games: at Iowa, at Indiana and home against Wisconsin.