EXPLAINER: What's at stake in concussion case against NCAA? 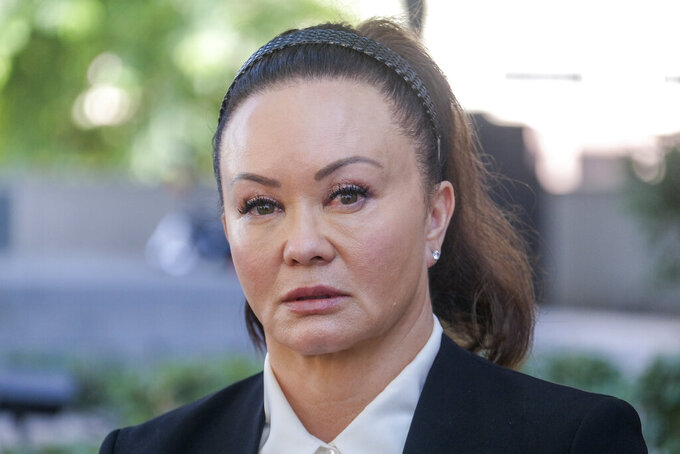 Alana Gee, the widow of a former University of Southern California football player suing the NCAA for failing to protect her husband from repetitive head trauma, leaves the Stanley Mosk civil courthouse of Los Angeles Superior Court on Friday, Oct. 21, 2022. Matthew Gee died in 2018 from permanent brain damage caused by countless blows to the head he took while playing linebacker for the 1990 Rose Bowl winning team, according to the wrongful death suit filed by Alana Gee. (AP Photo/Ringo H.W. Chiu)

The NCAA has been defending itself in court against a lawsuit brought by a former college football player's widow, who accuses the governing body of being responsible for the concussions that led to her husband's death.

Matthew Gee died at age 49 in 2018 from permanent brain damage caused by countless blows to the head he took while playing linebacker for Southern California from 1987-91, according to the wrongful death suit filed by Alana Gee.

The NCAA settled a class-action concussion lawsuit in 2016, paying $70 million to monitor former college athletes' medical conditions, $5 million toward medical research and payments of up to $5,000 toward individual players claiming injuries.

Hundreds of wrongful death and personal injury lawsuits have been brought by college football players against the NCAA in the past decade, but Gee’s is only the second to go to trial with allegations that hits to the head led to chronic traumatic encephalopathy, a degenerative brain disease .

A 2018 trial in Texas led to a swift settlement after several days of testimony by witnesses for the widow of Greg Ploetz, who played defense for Texas in the late 1960s.

The Gee case could be the first to reach a jury. Testimony began Oct. 21 in a Los Angeles court.

WHAT CHALLENGES DO THE PLAINTIFFS FACE?

Legal experts say Alana Gee's attorneys must prove proximate cause, that head injuries Matthew Gee sustained while playing college football were directly responsible for the CTE that led to his death.

“The causation issue, that’s been one of the major challenges in all of the concussion lawsuits,” said Gabe Feldman, director of the sports law program at Tulane.

Gee didn't have an NFL career. He went through one training camp with the Raiders, but did not make the team and he stopped playing football. While the plaintiff's lawyers make the case that Gee's CTE was the result of concussions suffered playing in college, proving that definitively is difficult.

"CTE is obviously a buildup of traumatic events in the brain, but you’re never really going to know what specific event caused it,” said sports attorney Dan Lust, who is not involved in the case.

“That’s not to say that you can’t win,” Lust added “Doctors can show with some reasonable degree of certainty that wouldn’t have happened but for his role in college.”

But the NCAA can argue: “What’s to say that something else didn’t cause these events,” Lust said.

Attorney Mit Winter, based in Kansas City, said plaintiffs must also convince a jury the NCAA was aware or should have been aware of the long-term effects of head injuries caused by football and failed to warn and protect players.

But it wasn't until the late 1990s and early 2000s that many major breakthroughs were made that linked repetitive head trauma from football to CTE and long-term conditions such as depression and Alzheimer's disease.

That's about a decade after Gee played at USC.

IS THE NCAA RESPONSIBLE FOR THE HEALTH AND SAFETY OF ATHLETES?

The NCAA has argued previously that as a governing body for thousands of member schools with athletic programs that it plays a supporting role in protecting the well-being of athletes.

“The duty belongs to the individual institutions, and their doctors and coaches are in the best position to protect the health and safety of their athletes,” Feldman said of the NCAA's position. “And that’s not to say the NCAA does not care about athletes' health, which is often how it gets portrayed. The argument is more nuanced that they don’t have a legal duty.”

WHAT IF A JURY RULES AGAINST THE NCAA?

One of Gee’s attorneys, Justin Shrader, said she is seeking $1.8 million in damages based on her husband’s life expectancy. He said Gee is also seeking damages for wrongful death, loss of her husband’s companionship and a survival claim for Gee.

NCAA revenue surpassed $1 billion last year. Most of that money is distributed to member schools, but the organization has also spent hundreds of millions on legal fees and payouts from court losses related to its amateurism rules over the last decade.

Damages from the Gee case would likely be manageable for the NCAA. The greater issue is what would come next.

“The big ramifications is you'd probably have a flood of similar lawsuits,” Winter said.

The NFL has been hit with similar suits and eventually agreed to a settlement covering 20,000 retired players. It is expected to exceed $1.4 billion in payouts over 65 years.

WHAT IF A JURY RULES IN THE NCAA'S FAVOR?

No matter the ruling in this case, it would not be binding precedent, especially outside of California.

Still, if the NCAA successfully defends itself against Gee's claims, it would fortify its arguments going forward.

“It would probably be somewhat of a deterrent because any competent attorney would find this decision in the records and have a conversation with their client and explain that this case is not good for their case,” Lust said.